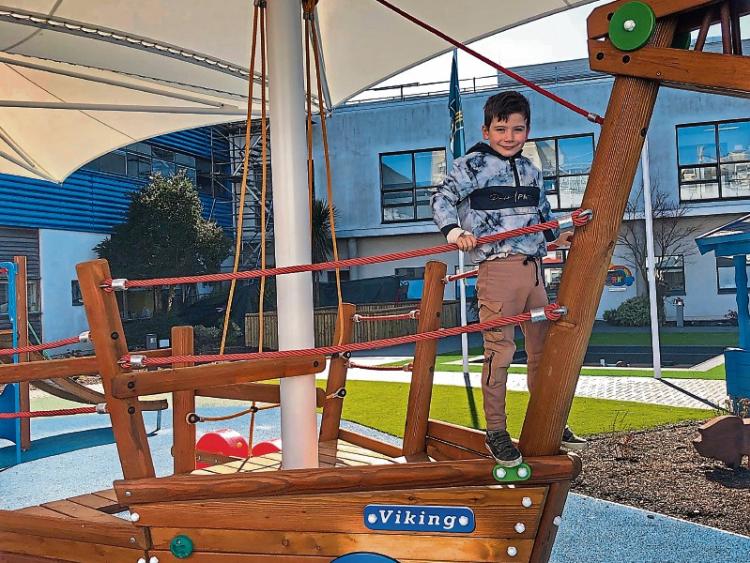 Ahoy, matey! Joey Griffin enjoys the Viking ship in the new playground in the Children’s Ark in University Hospital Limerick

MEET Joey Griffin. He’s not like you or I – Joey is a superhero!

The seven-year-old from Newcastle West has been through more in his short life than most of us will in our entire lives. Yet, as you can see from the gorgeous photo of Joey in a Viking ship in UHL he is the captain of his own destiny. And he is doing it with a smile on his face no matter what obstacles he faces.

Joey was born with a number of medical conditions including a very rare condition which affects just a couple of children in Ireland. Mum, Shauna explains that there was a gap in Joey’s oesophagus when he was born so he couldn't swallow.

“He wasn’t able to eat or drink for a long time, he was peg fed. He’s had a number of surgeries over the years, and I’ve lost count how many times he’s been in hospital. He has been through more trauma than I could even put into words, yet he is the happiest, kindest, strongest boy and anyone who knows him can attest to that,” said Shauna.

The most recent example of Joey’s innate kindness occurred on Mother’s Day.

“He had a two hour seizure, something that has never happened before. I was saying to the doctors, it's not like something you see on TV, it was very strange. He wasn’t shaking, he was just unresponsive. His eyes were open. It lasted for two hours.

“Three ambulances arrived. We got him to the Regional and they gave him medication. Within about 40 minutes it kind of worked and then he just went into a deep sleep for about 12 hours. That is when I was really scared that the Joey I know was not going to wake up because it had been so long. I really thought I had lost my son forever,” said Shauna, who also has an older son, Callum, who has autism.

But when Joey did wake up in the middle of the night she had no doubt that she had her son back. His reaction was like something you would see on TV.

“The first thing he asked because he had been at granny's house was, 'Where am I?'. I said 'You're in a hospital and you're OK'. He just hugged me and he said, 'I'm so sorry, it’s Mother's Day'. That was his concern. That's the way Joey is, he's extremely empathetic, he has so much empathy towards people,” said his proud mum.

MRI and EEG scans were undertaken but thankfully they showed no abnormalities. However, Joey must return in four weeks for more scans but like everything else he will take it in his stride.

“Even at the hospital before I was leaving, they were all amazed by him. They said, ‘This child is so happy’. They said they could hear him singing in the shower. They were all in stitches.

“He's so full of life, considering what he has been through. Some people would just wallow in it and he never has – ever since the day he was born. I have pictures of him as a tiny baby in hospital and he was still smiling. He always had it, this ability to just power through,” said Shauna. The son of Aaron and Shauna has two weeks to recuperate now as he is on his holidays from Killoughteen NS where teachers have also commented on his caring nature.

One day Joey told his mum that, “You fill other people’s buckets up when you are kind to them”.

He explained, “People have invisible buckets and you need to fill that up with kindness, to fill their buckets so they feel better”.

As many of our buckets are leaking due to Covid, we can all learn a lot from Joey, how he treats others and his outlook on life!