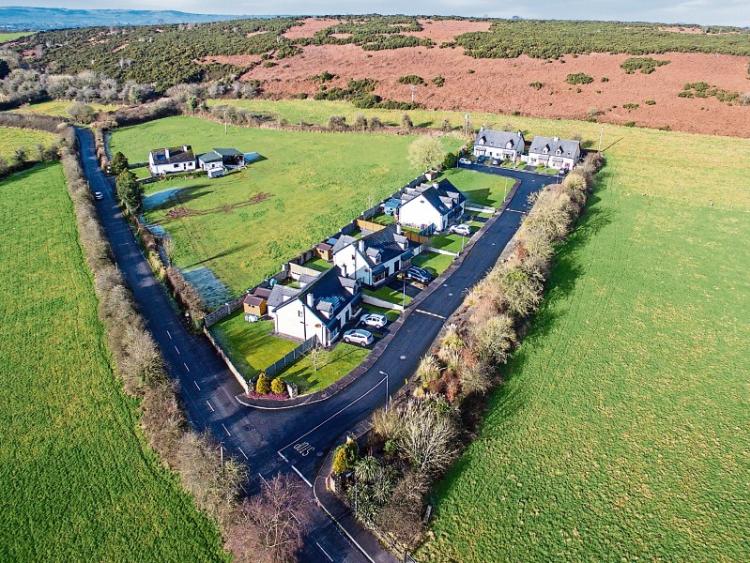 Who wouldn’t want to live in this idyllic location? Fernview, Kilmeedy, built by Corran-Deel VHA in 2007. Now they want to build a new estate in Feenagh

THE HEADLINE above may seem strange when you read elsewhere on this website about the shortage of and demand for housing.

Corran-Deel Voluntary Housing Association (VHA) wish to build a second estate in Feenagh village, and with the support of the council are seeking expressions of interest from prospective tenants.

The expressions of interest are necessary because there was not enough demand on the housing list to warrant proceeding to application stage. This may be linked to an issue raised by councillors at a Newcastle West Municipal District meeting last year.

Cllr Jerome Scanlan called for more houses to be built in villages instead of focusing on Newcastle West and Abbeyfeale.

Cllr Liam Galvin said the housing list is not an accurate assessment of where people want to live.

“People are not going to put down a place as their first choice when they know there are no houses there. Give people an opportunity to live in their own village, then their children go to the local school, join the local GAA club and build up that community,” said Cllr Galvin.

Which is exactly what Corran-Deel VHA is trying to do, said chairman, Dan Harrold.

“Our experience has shown that prospective tenants tend to select areas of preference based on their perceived likelihood of a better chance in securing housing in more built up areas. Some of our current tenants, originally from Feenagh Kilmeedy, moved back here from Newcastle West when we built Fernview and The Forge,” said Mr Harrold.

Fernview in Kilmeedy was Corran-Deel VHA’s first development. Completed in 2007, it’s a small estate of 10 houses. In 2009, The Forge in Feenagh, which has 14 homes, was constructed.

Corran-Deel VHA was set up in 2003 by a small group of volunteers from the parish of Feenagh-Kilmeedy. They were concerned about the effects of rural decline and the lack of quality affordable rental accommodation for families in both villages so the group.

Mr Harrold, says that “without a doubt” the tenants of both Fernview and The Forge have contributed hugely to the vibrancy and sustainability of both villages.

“Both national schools have benefited directly from teacher retention and even keeping the schools open. We have a few budding talents from The Forge and Fernview on the Feenagh Kilmeedy GAA team as well as Feenagh AFC, with tenants serving on committees of both clubs and playing active roles in our community. Our local Scór Group has achieved national success, with some of our tenants among its members.

“Our tenants are our neighbours  and friends and play a really important role in the life of both villages,” said Mr Harrold, who reports no antisocial behaviour.

Now, Corran Deel has identified a piece of land in Feenagh which they would like to purchase and build more houses. But they need the demand to warrant make an application to purchase the site and proceed with the development.

“The council suggested that we advertise for expressions of interest in the proposed development, to see whether there is untapped interest from prospective tenants who are either on the housing list and who would like to change one of their preference areas to Feenagh, or, from those who don’t realise that they may be eligible for social housing,” said Mr Harrold.

If the demand is there they hope to build between 10 and 12 houses but this is subject to the approval process set out by the Department of Housing.