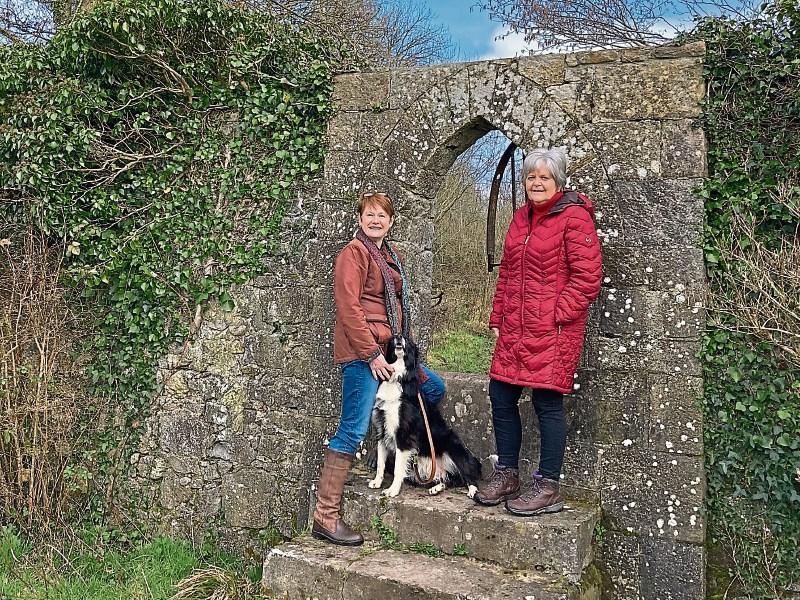 A LOCAL heritage and walking group in Clonlara has welcomed a favourable decision by An Bord Pleanala on the question of access to a traditional walk and prayer route that went back “centuries and generations”, according to a member of the local walking group, Rosemary Hannan.

The local group, named Céad Míle Fáilte for one of the features on the walk had become concerned by the erection of “unauthorised developments” on the route that had the effect, according to the local group, of hindering access to the walk enjoyed by generations of people from East Clare, Limerick and nearby parts of Tipperary.

After considering the question, An Bord Pleanala have categorically upheld the right to unhindered and unobstructed access to the walk enjoyed for centuries

Enforcement of the An Bord Pleanala decision will re-open access from the local St Senan’s Holy Well, along the boundary wall of the Kiltenanlea graveyard and through the three-stepped stile known locally as the Céad Míle Fáilte gate. This walk leads along the banks of the River Shannon all the way to the footbridge at Castleconnell from the left, or right towards the historic Landscape House.

To register a Right of Way, claimants must show they have had free use of the Right for 20 years prior to the passing of the Land and Conveyancing Law Reform Act 2009.

With so many Clare, Limerick and Tipperary visitors to the Doonass area, the local group is confident that their application to have this Right of Way registered under the County Development Plan will be only a matter of time, given the continued engagement of the county council officials and staff.

The local Clonlara Development Group are in the process of applying for grant aid to provide information, interpretation and signage for a heritage trail of fourteen historical sites in the Clonlara area. The heritage trail will be a circular loop (walking, driving /cycling) with the trailhead in the village. With the imminent development of the Greenway from UL to Scariff this trail will facilitate the development of tourism in Clonlara and prove to be a significant economic and social benefit to the local community.

Local woman Rosemary Hannan is quietly satisfied and confident that the matter will be progressed now to full fruition.

“The pandemic has had some positive outcomes for communities including the realisation that we have to mind and protect our local walking paths. Sadly, unlike Britain, traditional walking routes in Ireland are largely unprotected. In fact, many could be lost if not registered by November this year. There has never been a difficulty with the Doonass walk ‘til we started seeing completely unauthorised developments.

“We know that the route was certainly in use as far back as 1842 and the overwhelming likelihood is that it was a place to visit and enjoy for centuries and generations before that. The Doonass part of Clonlara achieved Europe-wide fame in 1895 when record-weight salmon catches became news across the continent.

“It’s worth pointing out that local anglers with permits from the ESB will soon return to salmon fishing as it is no longer prohibited on the Shannon including at these Castleconnell fisheries,” said Rosemary.

The big day in Doonass was the August 15 Feast Day Mass and traditional visit to the Holy Well, she says.

“At a time when so much has been lost, it will be a great comfort to locals and visitors to be able to visit the graveyard with flowers that were put into pots and containers filled with the water from the ancient river flowing just a few yards away. People have been doing it for generations and thanks to this decision, they can go on doing it.

“If the Covid restrictions were lifted, wouldn’t it be a fantastic symbol of the locals’ re-emergence and a symbol of gratitude and remembrance if we all gathered there to do what we have always done on that day in that place?” concluded Rosemary.