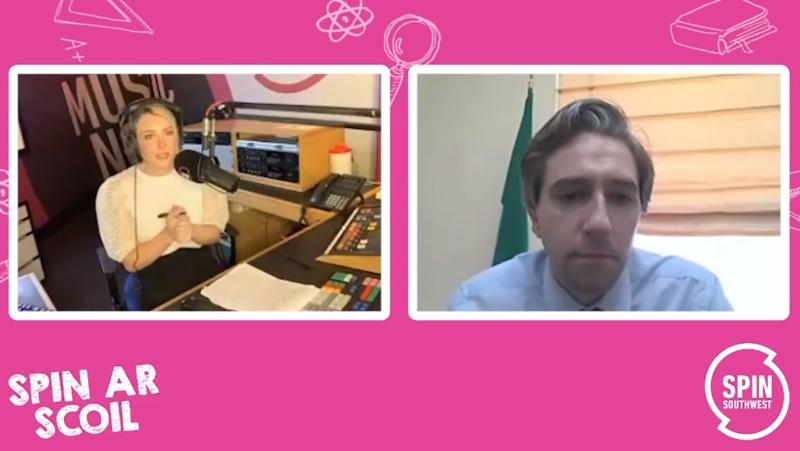 Last Saturday on SPIN Ar Scoil Minister for Higher Education Simon Harris announced his intention to “overhaul” the CAO next year, while also expanding alternatives to the Leaving Certificate.

Speaking on the show Minister Harris said that he believes the current format “narrows the conversation” about students’ future.

“The CAO form is not the only way of getting to where you want to get to in life,”

“In fact, next year I plan on overhauling the CAO form because I think it narrows the conversation way, way too much.

“What Covid taught me was that it’s actually possible not to have a Leaving Cert and for the sky not to fall in and for the earth to continue to rotate on its axis and for students to get on into college life.”

Leaving Cert Students and weekly contributors to Spin Ar Scoil, Caillum Hedderman, David Wright and Aoife Ní Riain questioned the Minister on the effectiveness of the Leaving Cert exams and the weight they carry in a student achieving their desired college place.

“Every single year on average about 50pc of students who apply to the CAO get their first choice and about 80pc of students get one of their top three choices,”

“What I’m saying to the Leaving Cert students this year is I’m trying to maintain those ratios, so I’m making sure you have as much of a chance as you would have in any other year.

“It’s highly likely you’re going to see [an] increase in points this year because the more choice you give the more likely that is to happen.”

“We have funding to increase the number of college places by just over 4,000.

“We’ve also now set up a group in the department, which is due to report back to me by Easter, to see what more we can do beyond that. I do want students to know 4,130 extra college places are in place this year.”

Speaking about the supply-and-demand issue on student accommodation, Mr Harris said he has asked officials to come up with proposals to solve the issue, adding:

“There is no point misleading you, that’s not going to be ready for this September.”

He also expressed a desire to try and improve the current mental health services offered in many third level institutions.

“We’ve very significantly increased the mental health budget for colleges. So we have put an extra €5 million into that,” he said.

“That money goes to the Higher Education Authority, they give it out to each college and each college decides ‘what do we need for our students’.”

He added; “I want to increase further the number of student counsellors.

“We sometimes don’t want to just access services face-to-face. One of the best things I think we’ve all worked out is setting up a 24/7 helpline by text.”

To listen to Minister Harris's interview in full simply search "SPIN Ar Scoil' wherever you get your podcasts or watch the full IGTV chat on Spin's Instagram page.

SPIN Ar Scoil is back this Saturday from 9am. Subjects up for debate are History and Geography plus some very special guest share their leaving cert memories and some career advice for students interested in the aforementioned subject areas.

This event is in aid of three great charities The Irish Cancer Society, Limerick Suicide Watch and the Mater Hospital.
The annual event is in memory of Jacinta O’Brien, a former lecturer in Sports and Exercise Psychology. UL students are asking people to get involved this week by running/cycling/ jogging/walking or swimming 9 kilometres, nominating 9 people and donating €9. For more information and to donate click here.