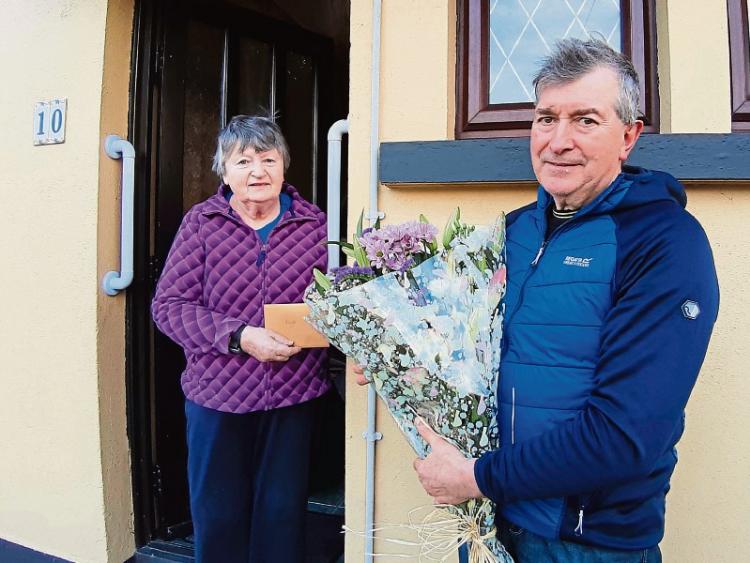 A HEARTWARMING story unfolded in Askeaton as the community council gifted their longest serving volunteer with flowers and more, to honour her retirement.

Noelle Dalton has volunteered at the Askeaton Ballysteen Community Council for 51 years.

However, when Noelle started there it was called Muintir na Tíre, a volunteer organisation set up in Askeaton after the Second World War in 1948.

Noelle’s parents were heavily involved in the volunteer organisation which is how she got entangled in the cause as well, when she was as young as 14!

Noelle chatted to the Leader in great detail about the accomplishments of the community council in her years volunteering, pride shining through in the way she spoke, “they were exciting times,” she said.

In her time at the community council, Noelle has accomplished many things. She has been involved in projects ranging from the set up of the Credit Union in Askeaton in 1968, to organising and restoring their now wonderful community hall. They hosted successful events such as galas and a local radio day. Many different groups were set up over the years from drama to badminton. “When I was young, we were just excited to be involved,” Noelle commented.

However, one moment in particular stands out to Noelle during her time volunteering,

“The highlight was when I met my husband in the community hall. He was singing as part of a showband. His name was Michael, or ‘Buddy’ as we called him,” she explained.

The community council has played a large role in Noelle’s life and she’s proud of all the work that’s been accomplished over the years, “it’s been a great place for the community to come together,” she said.

To honour her retirement, the community council decided to surprise Noelle with gifts. Noelle explained it was the last thing she was expecting, “I was absolutely shocked,” she remarked, “I just heard this knock on my door and then they were all outside. When you volunteer at these things you don’t do it for any reward, you do it because you enjoy it. It really humbled me that they made the effort.”

Noelle is now happy to settle into her retirement, content with all the work she’s done, “I will miss it, but I’m 75 yeas of age, there’s not much else I can give them.”

Noelle was very grateful for the gifts the community council bestowed upon her and she wishes them the best for their future endeavors.

Noelle concluded fondly, “I enjoyed all my time with them.”