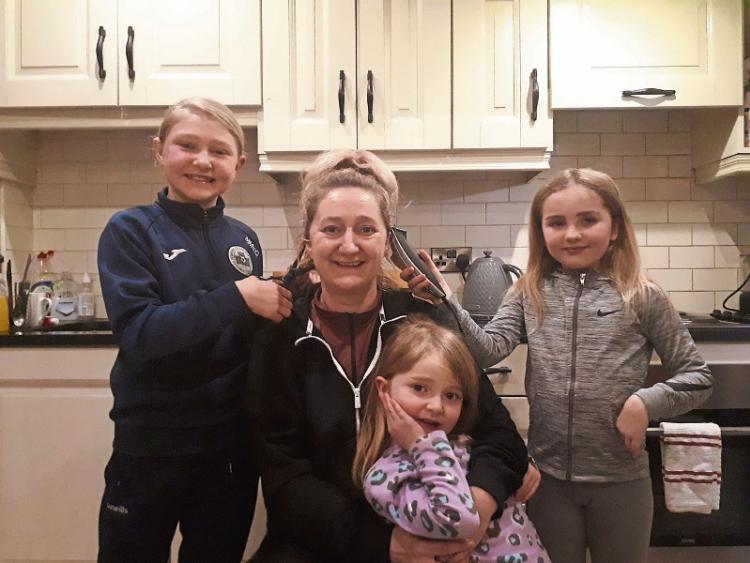 Madison McGuane and Libby McGuane, 11 and 5, with Ruby Bermingham, 7, as they prepare to chop Marion McGuane’s hair!

A LIMERICK woman is to shave off her blonde locks in a bid to raise money for her friend who is battling cancer.

Mum-of-five Marion McGuane is to have her hair subjected to clippers and scissors, with all the money from donations going to help her friend Ger Tracey, who is battling stage four bowel cancer.

As reported in last Monday’s Limerick Leader, 40-year-old Ger is facing the fight of his life to tackle a cancer which he says has “ravaged” his body.

The father-of-one has been in-and-out of hospital for the last two years after doctors found a 6.5cm tumour in his bowel.

After Ger exhausted his sources of income, his friends rallied to his aid, and launched the fundraiser to ensure he can get the extra treatments crucial to tackling cancer.

Marion, who lives in the Lee Estate, will go under the knife once the combined appeal hits €50,000, she said.​

“I don’t think it’s brave what I’m doing,” she said, “I only see it as a little gesture of solidarity and kindness to Ger. I stand among any woman who has to lose her hair. Hair doesn't define who a human being is. I'm willing to shave my hair so I can help a gentleman get more time with his family.”

Marion said after some initial reservation, her children are proud and supportive of her.

“My 11-year-old daughter Madison was screaming – but mum, your hair. But it will grow back. Now she thinks what I am doing is really cool,” she said.

Ger’s appeal has seen tens of thousands of euro donated, and Marion says it’s reflective of how well thought of Ger – who now lives in Spain – is.

“I know Limerick people are so kind. the community spirit is there. But he is just a really genuine nice bloke. If I can shave my head to get funds to allow a man and a woman spend more time together with their daughter. You just can't put a price on that,” she added.