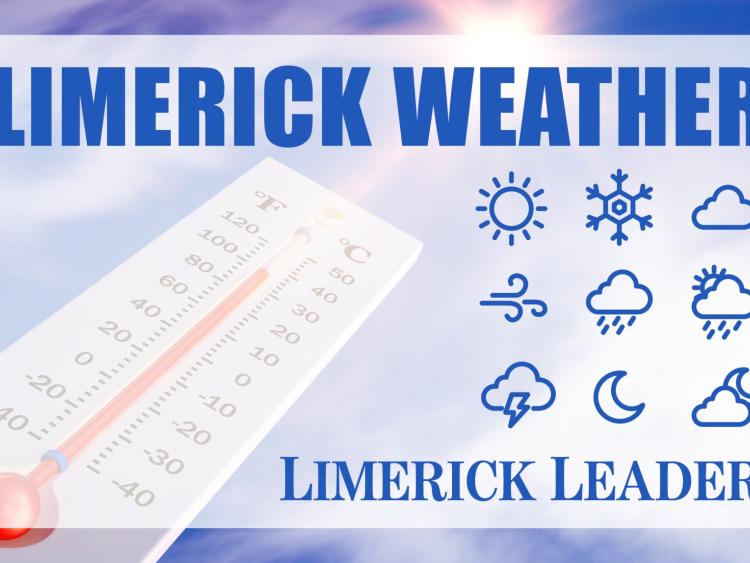 Monday will have a cloudy start with some patches of light rain and drizzle which will linger Limerick during the day. Elsewhere there will be good dry spells with cloudy conditions. Highest temperatures of 10 to 12 degrees with mostly moderate southwest breezes.

Monday night: Mostly cloudy with limited clear spells. Cloudiest to the west and northwest where there will be patchy light rain or drizzle, turning more persistent towards dawn. Moderate southerly breezes will be fresh at times near western coasts. Lowest temperatures of 6 to 8 degrees.

Tuesday: Tuesday will be breezy and mostly cloudy with occasional outbreaks of light rain or drizzle. Highest temperatures of 10 to 12 degrees with moderate southerly winds. Winds picking up later in the afternoon as a band of rain crosses the country eastwards during the evening, winds becoming strong on western coasts.

Tuesday night: Winds easing to a moderate westerly breeze in the clearance of the rain early in the night. Turning cold with lowest temperatures of 2 to 5 degrees. A few showers will move into western counties towards dawn.

Wednesday: Wednesday will be changeable with breezy and showery conditions bringing longer spells of rain at times. Dry and bright spells also, the best of which further east. Highest temperatures of 9 to 11 degrees with fresh and gusty southwest winds, strong in western coastal areas.

Wednesday night: There is some uncertainty in the forecast, but current indications suggest breezy conditions with a mix of showers and clear spells. Longer spells of rain are possible overnight. Lowest temperatures of 5 to 8 degrees with moderate to fresh and gusty southwest winds.

Thursday: Thursday morning will have showery rain in some areas, with a band of heavier rain crossing the country during the day. Highest temperatures of 8 to 12 degrees with fresh and gusty winds. Widespread showers will follow the rain and continue overnight, with a risk of some heavy showers in the west and northwest. Becoming cold with lowest temperatures of 1 to 4 degrees, with showers possibly turning wintry at times. Southwest winds will become strong in western coastal areas.

Friday: Friday will be breezy or windy with widespread showers mixed with bright and sunny spells. Risk of showers being heavy, possibly turning wintry at times. Feeling cold with highs of 5 to 8 degrees and fresh westerly winds, strongest along Atlantic coasts. Showers will likely ease overnight, but it will remain breezy. Lowest temperatures of 1 to 5 degrees.