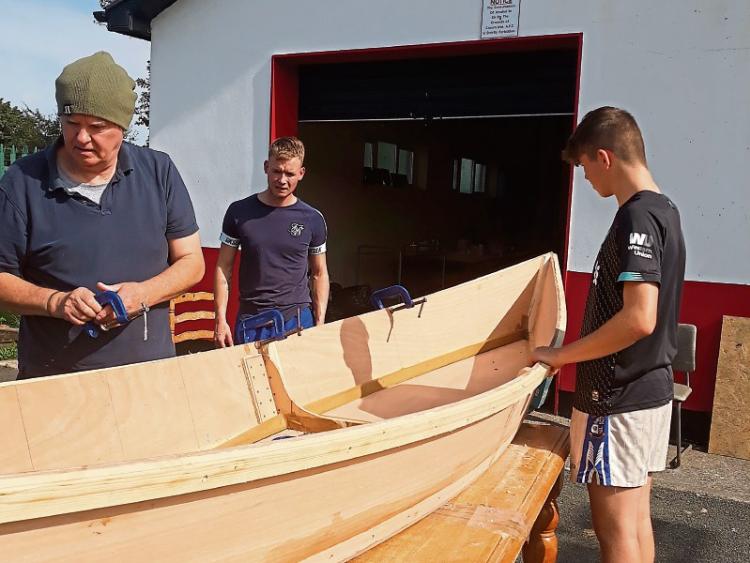 Result of their graft and craft: Toby Greystone, a woodwork tutor from LCETB who kindly gave his time and expertise, with Cian Shinners and Eric Cregan, Croom

THE FIRST lockdown last summer was sink or swim for many.

Now - rightly or wrongly - we are more used to Covid restrictions but back then it was all new territory. Ten young men chose to swim although the purpose of their boat building project is that they wouldn’t have to!

Rolling lockdowns had caused listlessness and isolation among young people in Croom last summer, according to Laura Elizabeth Kelly, a project worker with Foroige in Croom. Lauren said a lack of opportunities to mix with their peers safely resulted in 10 young men reaching out to Foroige Croom UBU Project.

“Through much consideration and researching, we realised we could develop a programme which allowed young people to meet safely and also learn a new skill,” said Laura, who credits fellow youth worker, Kirsty Boucher, with coming up with the idea of building a canoe from scratch.

“Thankfully we didn’t have to look too far. Monica Spencer from the Local Creative Youth Partnership (LCETB) approved our funding application, the Croom soccer committee donated their space and storage for months and Foroige provided the funding for materials. It was a labour of love and many hands and support makes light work,” said Laura.

“These young men showed commitment, skill and determination five days a week for at least three weeks. The project started with these talented young people creating plaques for their friends and families, then grew to functional tool boxes and eventually their eager ability allowed them to master a two man canoe built from scratch. Bad weather, online classes and working commitments did not deter these young men.

“To say their community is proud of them is an understatement. Their grit and hard work was put to the test once again in December where they had the opportunity to test if their homemade vessel was sea worthy. In a sink or swim moment these young men took to Lough Gur like it was their destiny to paddle their boat.

“On the day itself, the weather, which in Ireland is rarely warm in July not to mind in December, saw the wind and rain, whip and soak these men to the skin but not their spirit. They took to the water like experienced seamen and were not in the least shocked to see their boat float and conquer waves with amazing buoyancy,” said Laura.

On behalf of Foroige, she said it was with great pride they highlight the amazing and creative work of these young people of Croom.

“They have showed us through determination, commitment and imagination, great things can still happen, even in a pandemic. Friendships can grow, connections can be maintained and creativity can soar,” said Laura, who on behalf of the 10 boat builders and Foroige thanked Croom United; Toby Greystone, a woodwork tutor from LCETB who lent his time and wisdom to the project; Local Creative Youth Partnership for funding; and Lough Gur outdoor pursuits leaders for their time to allow young men to test their metal and carpentry skills.

They all passed with flying colours.