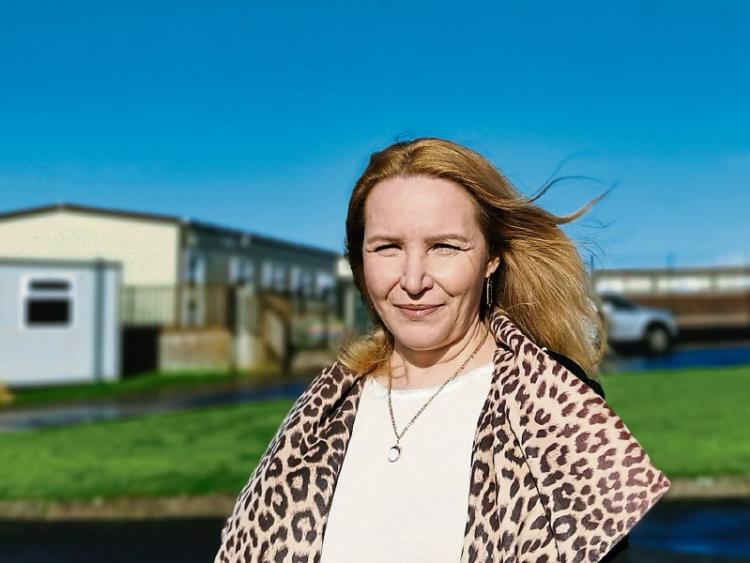 Cllr Elena Secas pictured outside Monaleen National School, which is operating from prefabs

EDUCATION Minister Norma Foley is being asked to approve a submission which will lead to an application to expand Monaleen National School.

The school is seeking to build 32 new classrooms in a new two-storey building on the same four-acre site, with the increase necessary due to a growth in population in the area.

The Limerick and Clare Education and Training Board (ETB) is set to meet with the Department of Education on April 1 next, and it’s expected that will pave the way for planning permission to be sought.

Labour councillor for City East, Elena Secas has urged Ms Foley to act quickly, pointing out her party colleague Jan O’Sullivan, then Education Minister, who initially funded the project back in 2015.

“After phase one was prepared shovel ready and was submitted to the Department for approval a few years ago, a political decision was taken to simply scrap it and deliver the project in one phase, to the dismay of the school who had put a lot of work and effort, time and taxpayers' money into Phase 1 and into the original plan,” said Cllr Secas, “The project has been since devolved for delivery to the local  ETB.”

She added the school project had the same timeline for delivery as the new St Paul’s National School in Dooradoyle.

“But the difference is that the St. Paul's NS project proceeded as intended without interference and is long completed with the school community enjoying their new school for the last two years, while Monaleen National School is still using prefabs. The continued delay has had a huge impact on the whole school community. People have lost all faith that this is ever going to happen,” she said.

Cllr Secas added: “The minister needs to clarify who decided to interfere with the project to change the delivery plan and why it was interfered with in the first place. Phase one of the original plan was a shovel ready project and it’s been completely stalled for several years to the detriment of the school community. She also needs to approve as a matter of urgency the ETB's submission so that the project can proceed to statutory planning.”

“The delays in advancing this project have been unacceptable and the people of Castletroy and Monaleen NS have had enough. No more excuses, we need to see delivery,” she said.

Cllr Secas spoke on this matter at this morning’s metropolitan district meeting.