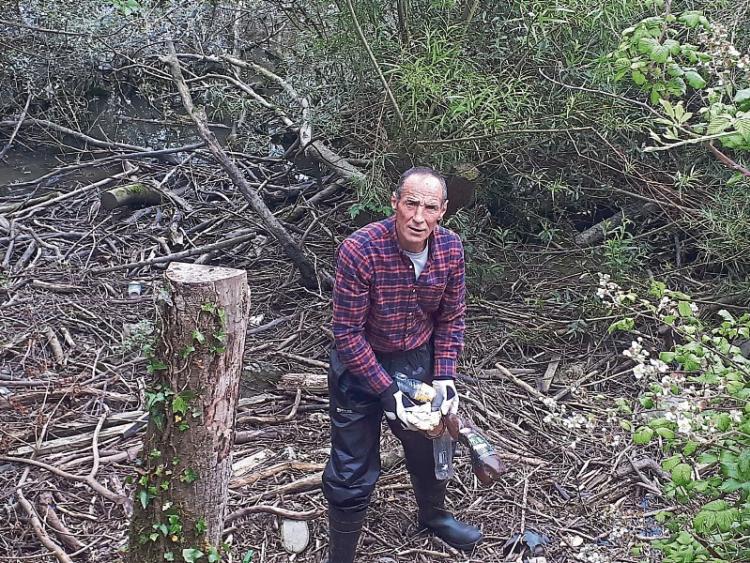 A LIMERICK man who has dedicated his spare time to cleaning litter from the banks of the Shannon has received the green light to do so officially.

Kileely’s Billy Grieves was last summer ordered by the Department of Culture, Heritage and the Gaeltacht’s National Parks department to cease work along the Condell Road where he had already cleared a significant amount of litter.

This came after complaints were made at the fact he was removing trees which had been felled by third parties, and in some cases, re-purposing the wood elsewhere on the riverside.​

A landscape gardener by trade, he said he was doing it out a love of his city – but he was asked to formally apply for permission to the department.

Fast-forward more than six months, and he has received the formal permission to work officially.

In a letter, Eamon Meskell, the regional manager of the National Parks and Wildlife Service, wrote: “We are happy for you to continue to remove plastic, metal and other polluting material from the site, and to remove a minimal amount of vegetation, debris etc to allow this benefiting work.”

Mr Grieves was advised that thee more natural habitat and dead wood left undisturbed, the better the site would be for a whole variety of wildlife.

Despite this, he is delighted that he has received formal permission to continue.

He said: “It’s taken me a long time to get this far. But thank God people have come to their senses. They see the work I am doing. I’m only trying to enhance the land and clean up the place.”

“It’s a river walk, and we need to look after the wildlife, who are the most important species down there,” he added, “It’s been a long journey, but it’s worth it!”

As for the future, Mr Grieves says he is hoping to be able to plant some of his own white primroses, and leave some natural food boxes below the trees.

“I’m so proud of my city and this is one of the best parts of it,” he added.

Last summer, Mr Grieves told the Limerick Leader he had been working on the Condell Road for 12 weeks, and up to 10 hours a day.

He said he spent his own money on gear including waterproof pants and tools.

Local Aontu activist Sarah Beasley, who helped Mr Grieves prepare his application to government is "beyond delighted" for him.

"To see the frustration of someone doing this for the people of Limerick and then to be stopped just because he wasn't aware he knew about the flora and fauna down here, it was tough to witness," she added.