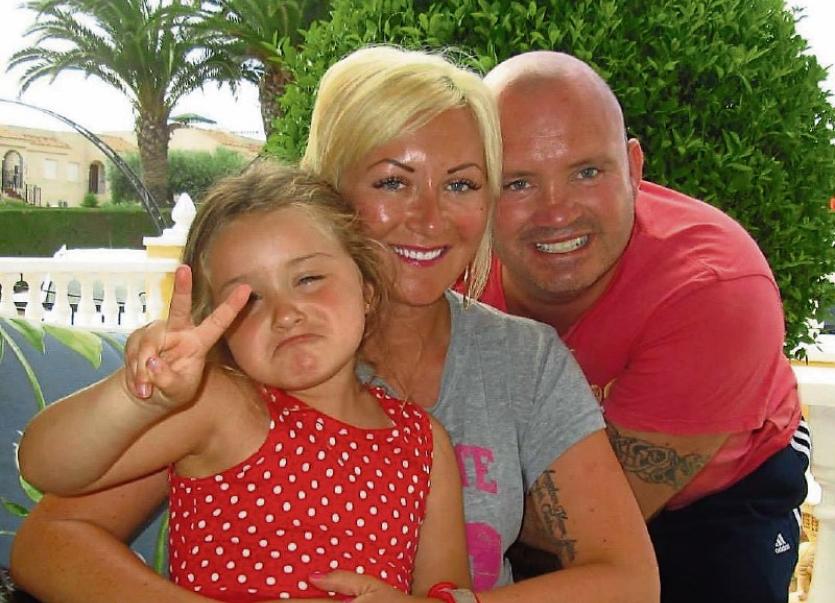 Ger, pictured with his wife Laura and daughter Nicole, 12, has thanked those who have supported him so far

A LIMERICK man is bidding to raise money for life-extending drugs to tackle a cancer which has “ravaged” his body.​

Ger Tracey, 40, has been in-and-out of hospital for the last two years, after he was diagnosed with stage four cancer, with doctors initially finding a 6.5cm tumour in his bowel.

Now, friends of the father-of-one, who lived in Moyross and Dooradoyle and is now based in Spain, have come to his aid to set up an internet fundraiser which will help him pay for the immunotherapy he needs to extend his time with wife Laura and daughter Nicole, 12.

It comes after Ger exhausted his sources of income, with insurers not covering the cost of the procedures he needed such as radiofrequency and testing of tumours and biopsies, crucial to his fight.

Ger’s concerns first arose in 2019 when after inexplicably gaining weight – to the stage where his daughter said his neck could be used to “swipe a debit card” – he went to the doctors, where the first tumour was discovered.

It was at this stage where medics informed him that he had a metastatic tumour, which means the cancer had spread already.

His first surgery involved removing half the bowel to take out the primary tumour. Since then, Ger has had a series of “barbaric” treatments which he says has left his body “ravaged”, while at one stage he was placed in an induced coma for a week.

It came after 14 tumours were found in his liver, paving the way for him to have a 60% liver resection.

Things did begin to look up for the former Enable Ireland staff member early last year, with doctors saying he was potentially curable.

But the pandemic saw the cancellation of regular scans, and the cancer spread again.

Another surgery followed last June which saw the removal of tumours from the left lobe of his liver and under his heart – with Ger having to pay this out of his own pocket.

Immunotherapy was offered to him at a cost of thousands per month – again not covered by insurers – which saw Ger’s pals step in.

“This disease is a criminal disease. When it gets to the stage I am at, you have to be super-wealthy to be able to afford treatment,” he said, “We had savings and we were coming to the end of them. We didn’t tell anybody because we didn’t want to take what we didn’t need. We pulled out all the stops to try and do this ourselves, but we were eventually pushed into a corner.”

Ger has described the disease as being like “Russian roulette”, saying: “The immunotherapy I am on has stabilised my lungs, but for how long? If I don’t feel well, I could go to the hospital and they could tell me they see a tumour there.”

Each day, Ger says he wakes up, and “forgives” the cancer. He takes a shower – to “wash away all the pain” – and says a prayer to Our Lady.