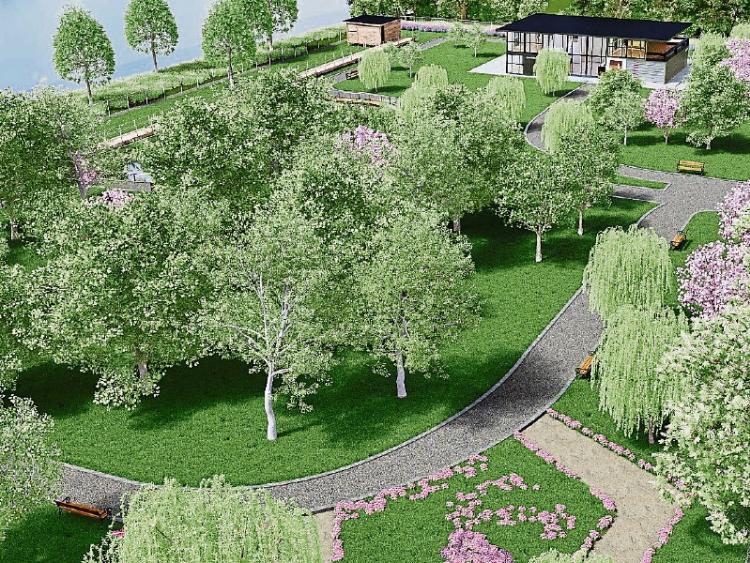 Designer Kevin McNamara’s render of how park could appear

RESIDENTS in Thomondgate have launched a campaign to build a nature park on one of the area’s last remaining undeveloped patches of land.

A riverside field off the New Road in the area has been earmarked for 63 housing units as part of a €400m regeneration which will also see a hospital in Moyross.

But locals instead feel that the area is better served by an open space – and have pointed to out-of-use homes elsewhere in the community which could be transformed for living spaces.

At present, the site is fenced off, and a hotspot for dumping.

Pat Murphy, who lives just opposite the land, said: “This area of Thomondgate has been neglected for over 30 years. No clean-ups have been done, there have been no positive structures.”

Although a campaign for a nature park has been taking place on-and-off for the last few years, it’s only now that a firm proposal has gone out to local councillors, with a blueprint subsequently set to be shown to residents and local schools.

Pat added: “It would be a unique sort of development not just for Thomondgate, but for the city. It would be a part of green tourism, eco-tourism. Schools will be able to use it come and be educated about nature. There could be an interpretive centre on the site used by anybody. There are 10 schools within a mile-and-a-half of here.”

Lucy O’Sullivan, who is from Corbally, has said she’s “alarmed” to see the council planning for homes on the site, which is riddled with knotweed.

She argued the Three Bridges walk could be extended into Thomondgate with the opening of an eco-park like this.

“I’d like to see this site incorporated into the river. It’d be wonderful to think this could be part of my Sunday walk. We don’t have many sites like this which are on the riverbank. The river is really different here to what it is inside of town. It’s a powerful moving body of water,” she said.

Ms O’Sullivan says there are homes local to Thomondgate which are out-of-use, but could be brought back to life with only a limited amount of work, perhaps negating the need for the new-build houses.