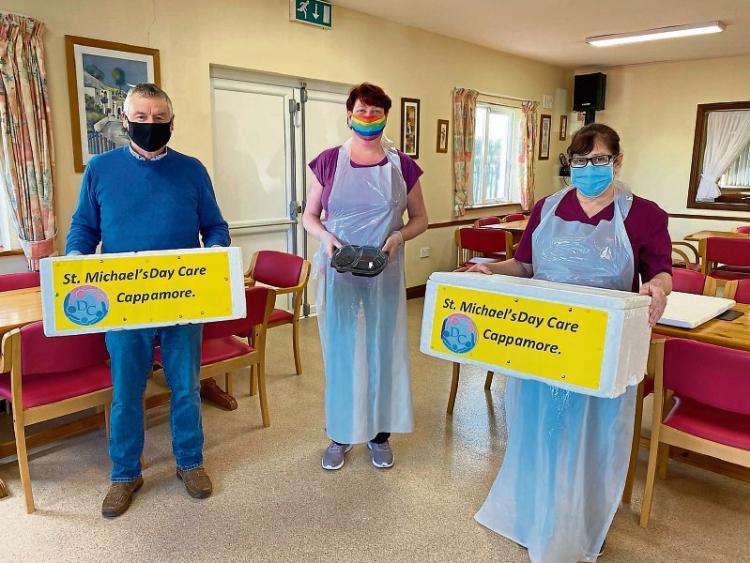 THREE years ago staff and volunteers of St Michael’s Day Care Centre in Cappamore ensured their patrons had fuel and food during the Beast from the East.

And they haven’t been found wanting when a different type of beast from the east emerged. Every week over 160 elderly people – the majority living on their own – receive delicious dinners made in the centre’s kitchen.

St Michael’s is a home from home for service users in Cappamore, Doon, Murroe, Pallasgreen and Oola. In pre-Covid times, it was a hub of activity with elderly men and women visiting every week for fun, dinners, medical care, music, dancing and lots more.

That can’t happen currently so their bus, instead of picking up people, is dropping off hot dinners.

Liz Grant, manager, said: “We have volunteers in their cars delivering dinners as well so as they don’t get cold. We are supplying dinners for the four days we are open.”

Between staff and volunteers, 11 men and women are ensuring the dinners are made and delivered.

As well as feeding the body they are nourishing the mind by dropping off a paper and having a socially distanced chat. As many of the recipients live on their own it might be the only person they see all day.

They are also feeding the soul by taking on the Jerusalema dance challenge, which was expertly captured by Jimmy Long Media. It has proved a huge hit online.

Liz, who is continuing on the excellent work of Sr Mercy O’Dea, said one thing she and the the staff in the day care centre have learned is that, “It is important to be upbeat in these challenging times”.

“So the staff got together and decided to do the Jerusalema challenge under the guidance of our choreographer Josephine. It was the highlight of our lockdown.

“We were joined by some volunteers that deliver dinners daily and also our local Garda Bill Collins. As some of us were a bit stiff we were well out shone by the excellent performance of everyone else. Well done to one and all. I am so proud of you all and I am privileged to be your manager," said Liz.

She says they are honoured with the support and demand for dinners and stresses that you don’t have to be a prior attendee to receive one. If you are of a certain age and living in east Limerick, contact Liz on 061 381034.

Liz said they feel honoured with the support and demand for dinners but they can’t wait to welcome service users back through the doors again.

And when they do they will surely have to perform the Jerusalema dance challenge again!