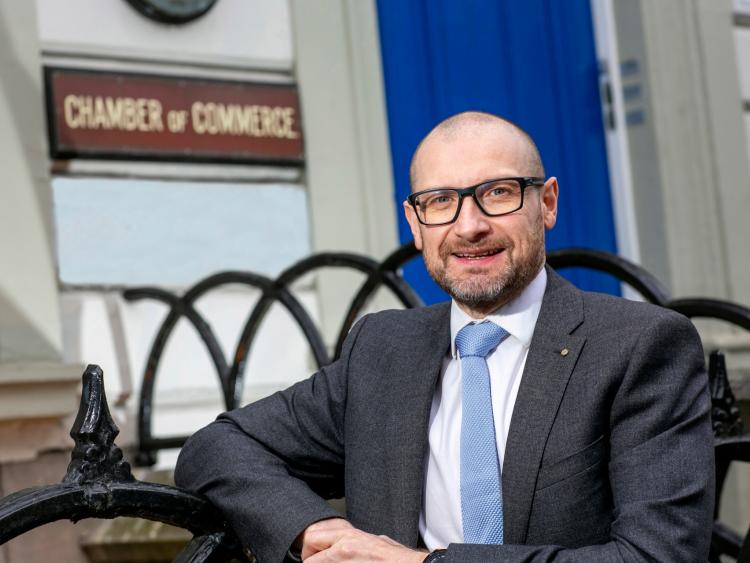 Limerick man Donnacha Hurley has been confirmed as the newly elected President of Limerick Chamber.

Speaking after formally taking over the role from outgoing President David Jeffreys, the General Manager of the Absolute Hotel commented on significant strengths and opportunities within the region but stressed the importance of supporting all businesses through the uncertainty of the pandemic and not leaving any sector behind, while he admitted that working collaboratively and with speed will enable Limerick to be one of the country’s leading growth centres post-COVID.

“There remain serious challenges ahead for many Limerick businesses and for some right now, particularly in the retail and hospitality sector, it might be hard to see positives.  It is critical that the Chamber continues to advocate at a national level for the assistance required to support a Mid-West recovery and simultaneously continues to work with local stakeholders and the local authority for the speedy deployment of supports.

“The Chamber is committed to being a driver for positive change in the city, recognising the benefits of a thriving Limerick city for all businesses operating in the Mid-West. Last week’s announcement of the go ahead for the €9.1m revitalisation plan for O’Connell Street is a huge step in the right direction.  We need to make Limerick city centre accessible, attractive and conducive to living and working in.”

All four Directors  are highly skilled and experienced in their respective areas and are important additions to the Chamber Board at a critical juncture in the development for Limerick and the Mid-West.

Welcoming the incoming President, Chamber Chief Executive Dee Ryan said:  “Donnacha is passionate about Limerick and the region, has huge energy, great ideas and shows leadership. It’s a crucial time for business so this expertise and experience is going to be essential.

“Just as having David Jeffreys, CEO of Actionpoint technology company was hugely beneficial for us as a Chamber when business almost overnight went online, it is equally fitting to have Donnacha, given his particular background in the hospitality industry, take on the Presidency during a period when we are focusing on making our city centre more attractive for people to visit, live and work in.

“We thank David for his efforts over the past 12 months. It was a really difficult time but his stewardship was invaluable. I want to also wish Donnacha well and the Chamber team looks forward to working with him in the months ahead.”

A native of Castletroy, Limerick, Donnacha has been General Manager of the Absolute Hotel since 2008. A graduate of the world-famous Shannon College of Hotel Management, he also holds an Executive MBA from the Kemmy Business School, University of Limerick and an M.Sc. in Hospitality Management at DIT. In addition to his board membership of Limerick Chamber, he is also a member of Retail/Hospitality, Membership & Policy sub committees, the Failte Irelands Gateway City group and sits on the Board of the Shannon Region Conference & Sports Bureau. He is a former member of the National Council of the Irish Hotels Federation and was Secretary of its Shannon branch.