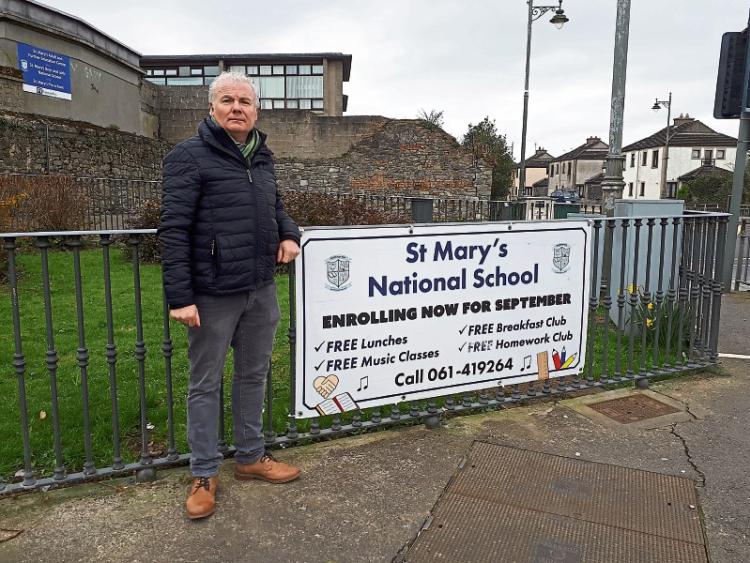 Sinn Fein councillor John Costelloe pictured at the gate of St Mary’s National School, where there are fears for teaching jobs

STAFF and parents of children attending a city school fear it will lose two out of its six teachers due to declining pupil numbers.

St Mary’s Boys and Girls National School at Bishop Street has seen its student numbers fall from 117 to 100.

And this could mean the school may lose teaching staff, with staff set to learn their fate in the coming weeks.

While the school did not publicly comment, local Sinn Fein councillor John Costelloe has been briefed, and says because St Mary’s caters for some of the most marginalised students in society, any loss of teaching personnel would have “devastating” effects.

The school is in the Deis band, a scheme which aims to address the educational needs of youngsters from disadvantaged communities.

As part of this, it means a range of additional resources are available to tackle any educational disadvantage.

It is for this reason, Cllr Costelloe says, that the school needs to keep its complement.

“This school has been identified as being among the most disadvantaged and marginalised in the State. I’ve met with the principal and a number of parents and they are totally at a loss. This cannot be allowed to happen,” the northside member said.

“A lot of the children will have difficulty in terms of education and need a lot more attention. Priority needs to be given to the children, to their education, and to their future,” he added.

Cllr Costelloe also pointed out that it’s better to have fewer students in a classroom in the wake of the Covid-19 pandemic.

A Department of Education spokesperson confirmed the main factor for determining the level of staff is the number of pupil enrolments the previous September.

They added Budget 2021 provided for a one point improvement to staffing schedule and introduced new retention levels for schools, while Education Minister Norma Foley has announced additional funding for the school completion programme in Deis schools.