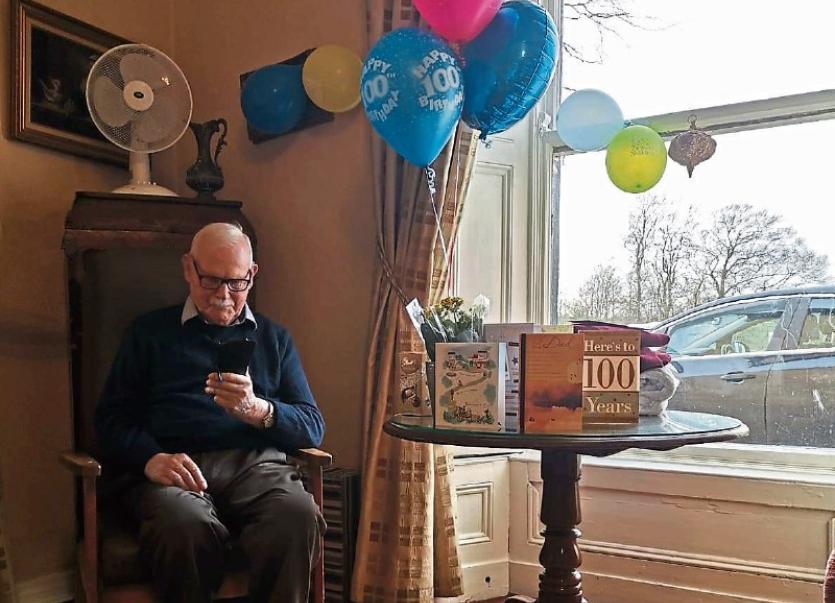 Martin Enright FaceTimes family in Canada on his 100th birthday

MARTIN Enright’s family in Canada couldn’t be here for his 100th birthday due to Covid but residents and staff in Beechwood Nursing Home ensured it was still a day to remember.

They celebrated with a special cake, a rousing rendition of Happy Birthday and Martin FaceTimed his sons and daughters abroad. Reporters always ask centenarians what is the secret to their long life and in Martin’s case it is love.

He was a smoker until he met the love of his life – Audrey Smith.

“I smoked when I was in England until I met a girl. I said to myself, ‘Well, I have to give up one or the other, which will it be?’ It didn’t take long for me to say I will give up the cigarettes,” said Martin.

He and Audrey were in love from the moment they met and spent their long lives together until she sadly passed in 2017. They had nine children – daughters Katherine, Blaise, Therese, Christi, Mary and Ann, sons Martin, Brendan and Brian.

While he did enjoy to smoke until fate intervened he was never much of a drinker.

“I never never had enough money for drink when I was young,” he laughs down the phone while chatting to the Leader.

Asked about turning such a great age, Martin, as cool as a breeze, said, “If you were in my boots you wouldn’t think anything of it!”

Born on February 18, 1921 in Broadford, Martin left these shores, like many before him, as a young man. He went first to England and then to Canada. He and Audrey returned to Limerick in later life and settled in Patrickswell.

For the last year, Martin has been living in Beechwood Nursing Home in Newcastle West. He said he is safe from Covid in Beechwood and like the rest of us can’t wait until the pandemic is over.

John Raleigh, proprietor, said it is a pleasure to have Martin in Beechwood.

“Everyone loves him here. He’s a lovely man and very pleasant. He gets up every day, comes down, reads the paper, interacts with other residents and staff. He is a pleasure to have,” said John. He and director of care Eileen Sweeney ensured Martin had the best 100th birthday celebration possible.

Dick Nash, a neighbour of Martin’s in Patrickslwell, gives a great insight into his friend.

“He’s like a young fellow. He fills the oil tank every summer. It is about eight foot high but he’d go up the ladder himself and dip it. He did it the summer before last! He’s big into flowers and gardening – he’d be out every morning at 9am.

“He was a gifted stonemason and worked hard all his life,” said Dick, who like all Martin’s friends and family wished him a very happy 100th birthday.