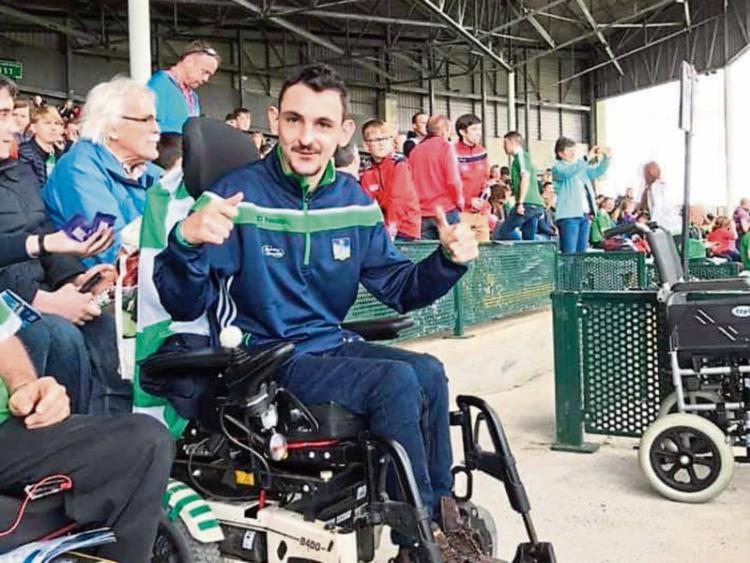 FOR some of us, walking on dog waste in the street is an irritating inconveniences.

But for one Limerick 28-year-old, it immense physical pain, with a number of people having to suffer the consequences at times.

Mikey O’Doherty, who lives in Lord Edward Street, uses a wheelchair since he has a form of cerebral palsy.

He took to social media this month to urge dog owners to please clean up after themselves.

In the appeal, he wrote: “Lads, I’m so annoyed. I was on a coffee walk tonight in my wheelchair. I rolled over s**t. I have to get on a bus five days a week with Enable Ireland, and it’s not fair on the staff that have to be putting my wheelchair on the bus, and having to clap the wheelchair down. It’s very annoying when you bring s**t around with you, so please pick up your dog s**t.”

While some of us, having trodden in dog poo would wipe it off our shoe at a nearby grass verge, for Mikey, it’s a lot more complicated than that, with his wheels caked in the defecation.

“I have to get out of my wheelchair and get a bucket of water and clean the wheels with a cloth. You can’t powerwash a wheelchair, because if you do this, all the electrical wires will get, and you’d risk the wheelchair not running,” he said.

Having to get out of his chair and onto sticks is an immensely painful experience, and the city man – who is currently studying at Mary Immaculate College – feels he shouldn’t have to do this.

“It’s really embarrassing as I have to go everywhere in my wheelchair, and I don’t want to be dragging crap in wherever I go. When my friend smells something on my wheels it makes me feel bad,” Mikey said.

He feels dog owners who do not clean up after themselves are “selfish,” adding: “Everywhere around Limerick this is an issue. I don’t mind people having animals – I love animals. But it doesn’t take two minutes to pick up their crap off the street. It’s not nice. If you can’t mind a dog properly, don’t bother with a dog.”

Mikey’s comments come as councillors unanimously passed a motion calling for a public awareness campaign on the issue of dumping.

Labour member Conor Sheehan, who drafted the motion, told the metropolitan meeting: “I am inundated with calls from members of the public about rubbish being dumped everywhere, areas being littered, and I know myself from going around the city, there are large volumes of discarded PPE, there's coffee cups, there's gloves, bags of dog poo, not to mind dog poo itself.”