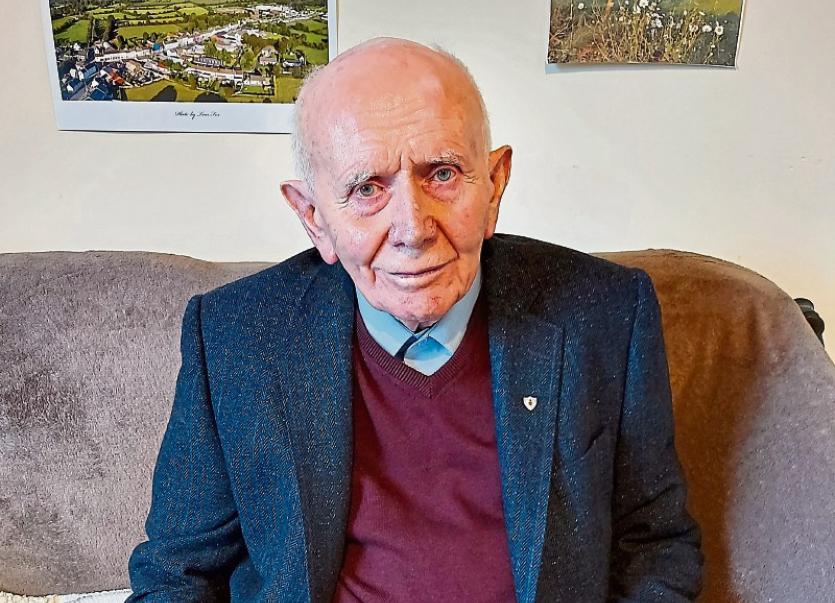 Limerick man Tom O’Mahony is celebrating on the double this week. He received his first dose of the Covid vaccine on Wednesday and will celebrate his 100th birthday this Saturday.

Born in Ballyfaskin, Ballylanders on February 27, 1921, Tom has been alive during many of the atrocities of the War of Independence that we are currently commemorating.

Tom resides with his daughter and son-in-law, Eileen and Tom Byrne in Wicklow. He was driving until Christmas 2017, helped move cattle across the road up to a few years ago and still loves a game of cards. Tom reveals the secret to his long life and continued good health to the Leader.

“No porter, whiskey or smoking,” said Tom, which is bad news for most of us! He also stresses the importance of being a kind, helpful human being, a good neighbour and going to Mass.

But most of all, Tom says “being well looked after by a good wife who worked alongside me over all the years”.

He married Alice Martin in 1951 and they have three children - Billy, Maura and Eileen. They were man and wife for 67 years. Sadly, his beloved Alice passed away in August 2018.

Tom attended school in Anglesboro and Mitchelstown. His early days were spent working on the family farm where he grew up with his three siblings. From there he went to work in Dinny Dwyer’s Garage in Ballylanders. This was to set his career path for the next twenty five years.

In the early days he was interested in electricity and having answered an ad in the local paper he erected a wind charger for the Tobin family in Ballylooby. It had been sent to them from the Mayor of Boston, a relative of theirs.

He completed his training as a mechanic by ‘serving his time’ in McGuinness’ Garage, Tipperary, Cavanagh’s of Fermoy and Enniscorthy Motor Company while also engaging in a correspondence course with The Bennett College, Sheffield.

In the late 1940s he rented a premises in Ballylanders and opened his own garage business. He then bought the ‘Old Barracks’ for the sum of £500, where he built a spacious garage. Tom was owner, mechanic, electrician, salesman, hackney driver and driving instructor.

An explosion in the garage in 1959 left Tom hospitalised for several months, while Alice ran the business.

A few years later they left the motor trade and returned to farming. They farmed in Ballinvreena, near Emly and later in Cappauniac, near Bansha.

After a long working life Tom and Alice sold their farm and retired to Cahir.

Tom’s brother, the late William O’Mahony, wrote the local notes in the Limerick Leader and the Avondhu for years. His late brother Mike was a well known farmer and cattle dealer. His sister, Phil O’Hea, lives in Cork.

His daughter Eileen said they had parties for him in Wicklow for his 98th and 99th birthdays, when friends and family gathered.

“Unfortunately this year it will just be the household members celebrating with him. He has received lots of cards and presents and he will enjoy reading all the messages and letters, over and over,” said Eileen.

“He sometimes complains about sitting around all day and feels he should be ’more useful’. He still offers to help fix things, stand in a gap etc. He likes to keep his shoes on, instead of slippers, in case he is needed to help with cattle. He loves to ask about what is going on, on the farm and chats with his son-in-law Tom about it. Are the cattle in? Are the cows calving? When is the silage cutting starting?

“He is very appreciative of all that is done for him and takes nothing for granted. Always concerned we might be working too hard or not getting enough sleep. His grandson Tom Byrne and his fiancée Yvonne O’ Loughlin look after him also,” said Eileen.

Having received the Covid-19 vaccine, Tom is hoping for a proper birthday celebration in 2022 and in the years to come.