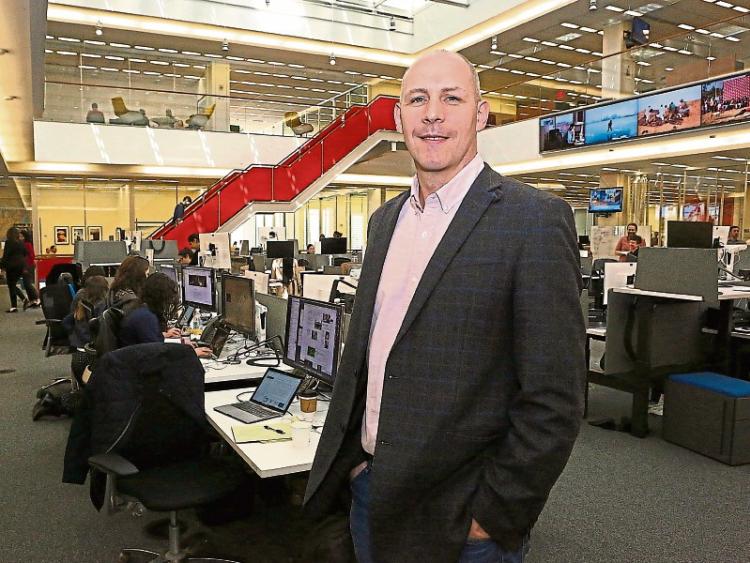 Malachy Browne in the newsroom of the New York Times

THE New York Times Pulitzer Prize-winning journalist Malachy Browne is set to inspire young journalism students at the University of Limerick via a webinar this Wednesday.

The Broadford native who is a Senior Producer in Visual Investigations at the New York Times – a unit that he co-founded in 2017 - will link in with journalism students and campus staff from his base in the Big Apple.

Mr Browne won the highest accolade in journalism – the Pulitzer Prize – in 2020 for the sometimes “risky” work, that he and his team carried out in proving for the first time that Russia had bombed Syrian hospitals and civilians.

And his team has recently published a series of reports on the riot at the US Capitol.

Mr Browne said: “Our work combines traditional reporting with digital sleuthing and the forensic analysis of videos and images to find truth, hold power to account and to deconstruct significant news events.”

In his UL webinar entitled: Visual Investigations: Innovation in Truth Telling, Mr Browne is to give an insight into the workings of their team which comprises open source reporters, story producers, video editors and animators, along with copy editors and audience development editors.

Mr Browne has also led investigations into the killing of George Floyd, Breonna Taylor, Ahmaud Arbery and other black citizens; the Las Vegas mass shooting, chemical attacks in Syria and extra-judicial military killings in Nigeria. His team was first to name the Saudi officials who murdered journalist Jamal Khashoggi.

And it was also the first team to reveal how Iran's military shot down a passenger plane in Tehran.

UL Senior Lecturer in Journalism Mary Dundon who will moderate the webinar said: “We are delighted to have such a distinguished journalist address our students. Mr Browne’s work has been cited in murder trials, congressional hearings and UN Security Council meetings. It has also triggered government inquiries and policing reforms, and has led to the suspension of weapons sales to Saudi Arabia.”