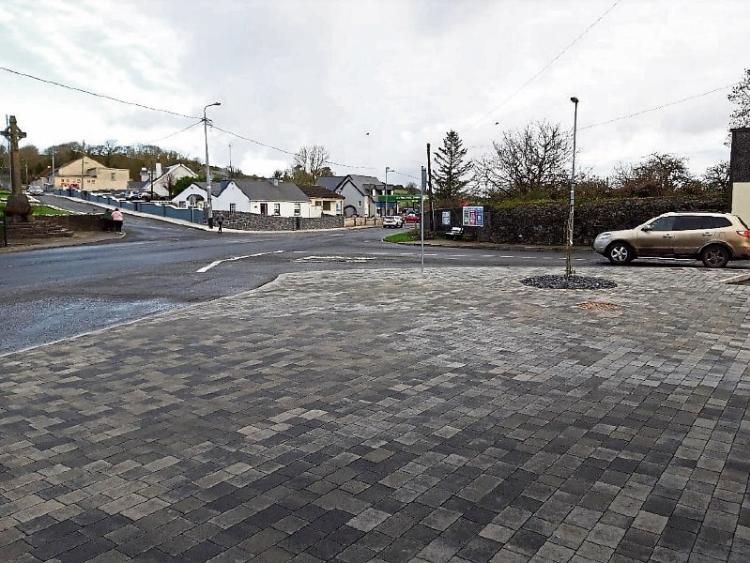 The new plaza in Shanagolden

LIMERICK City and County Council has been urged to reconsider the decision to remove a number of parking spaces from a Limerick village.

A new plaza, a raised table junction and additional footpaths have been installed as part of road safety works at the crossroads in Shanagolden.

Briefing members of the Adare/Rathkeale Municipal District, senior executive engineers Aidan Finn said the project, which is nearly complete, has been very well received locally as “it creates a village centre and provides connectivity to local essential services within the village”.

However, speaking at a virtual meeting Cllr Kevin Sheahan expressed concern over the removal of up to eight parking spaces.

“I didn’t think you were going to restrict parking,” he said adding that there are two funeral homes in Shanagolden and that “night funerals” were a regular occurrence in the village prior to the pandemic.

“You get huge crowds attending those removals of remains and they will have no place to park – that’s a favourite place that has been taken away. People will now have to walk longer distances on winter nights and I think you have made a mistake and I think you should consider revisiting it,” he said suggesting that parking spaces could be “marked out” on the new plaza.

In reply, Mr Finn said the parking situation that existed prior to the works was unsafe and that the new plaza has “opened up” the area for pedestrians and will allow other events to take place post-Covid.

He said details of the proposed works had been circulated to councillors in advance of any works taking place and that there was no need to undertake a formal consultation process as the overall cost of the project was below the necessary threshold.