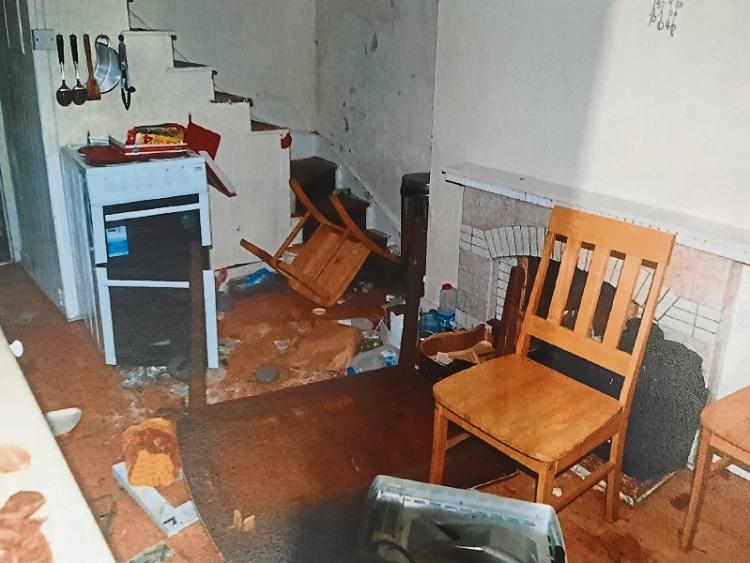 The house at Saint Thomas Cottages was ransacked during the incident

TWO men have been jailed following a violent incident at a house in Foynes during which another man was attacked and thousands of euro worth of damage was caused.

Joseph Mulcahy, 28, of Meadow Lea, Ballyhahill and Thomas Moroney, 24, of Mount David, Shanagolden had pleaded guilty to charges relating to an incident at Saint Thomas Cottages in the village on January 20, 2019.

During a sentencing hearing, Detective Garda Jason Mitchell said the defendants were initially “greeted” into the rented house but that things quickly “turned bad”.

He told Lily Buckley BL, instructed by state solicitor Aidan Judge, that both men started shouting and roaring and that they then “made a drive” for the victim.

The detective said gardai have been unable to definitively establish the background as there are “conflicting stories”.

Judge Tom O’Donnell was told Mr Mulcahy produced a knife during the altercation and that the victim was struck across the head with a bottle of vodka.

He was then punched by Mr Moroney who threw him onto a couch while Mr Mulcahy “prodded” him six times with the knife.

After submitting photographs to the court, Detective Garda Mitchell said the property was ransacked and that various items including a TV and various kitchen appliances were damaged.

After the victim, whose aged in his mid-20s, escaped via the back door, he ran to a neighbouring house and raised the alarm.

The defendants followed him and began to throw things at the  house but were unable to gain access before the arrival of gardai.

Mr Moroney, he said, had a hatchet in his hand when gardai arrived in the village within minutes of the alarm being raised. A knife was also recovered when he was arrested.

Ms Buckley said the victim sustained several cuts and grazes and that he also suffered from bruising and tenderness afterwards.

He has since moved out of the area, has “turned his life around” and is working full time.

The defendant’s each have a number of previous convictions and both are currently serving a separate sentence for a burglary offence.

Imposing sentence Judge O’Donnell said what happened was “absolutely and utterly outrageous” and he commented that whatever the background “two wrongs don’t make a right”.

He said the defendants were “not entitled, in any way, to mete out summary justice” in the manner the did and that he had to mark the court's disapproval.

In each case Judge O'Donnell imposed a three and-a-half year prison sentence which is to be served concurrently to the sentences that both men are currently serving.