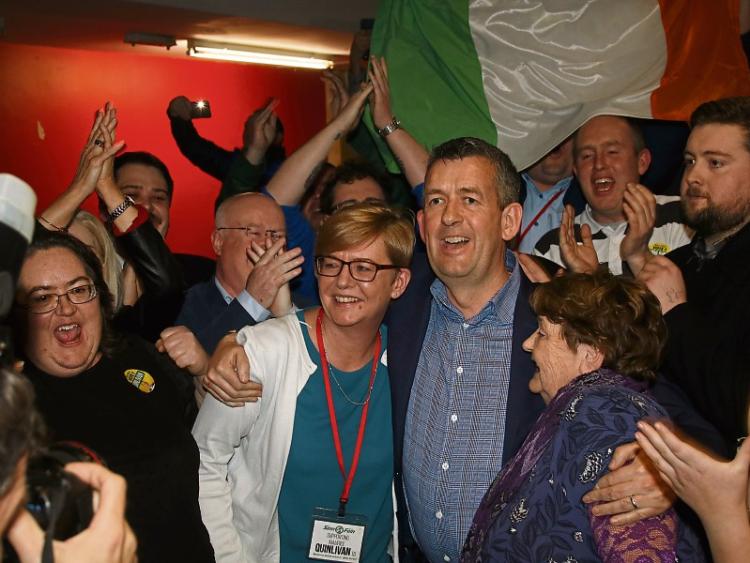 IT feels like a completely different world now, but just 12 months ago, Dail hopefuls in Limerick and across the country pounded the footpaths in the hope of securing a place in the Oireachtas.

Back then, it was adverse weather in the shape of Storm Ciara which many feared would wreak havoc on the first Saturday election in a century, not the closing in of a deadly virus which originated in China.

At a time when social distancing was not in the public lexicon, there were hugs of relief and tears of joy at Limerick Racecourse.

Political victors were hoisted shoulder high as the county and city returned its squad of seven TDs for the 33rd Dail.

In what was a seismic election which shook the establishment, Sinn Fein won the most votes as the electorate turned on Fine Gael and Fianna Fail.

But due in part to the fact Mary-Lou McDonald’s party did not perhaps anticipate winning so many seats, it was the Soldiers of Destiny who finished one seat ahead, paving the way for a grand coalition deal between themselves, Fine Gael and the Green Party.

By the time, the government was eventually formed, and Micheál Martin finally secured the office of Taoiseach which he had craved for so long, there was disappointment, as Limerick was left without a seat at the cabinet table.

The three-party government meant that senior positions were at a premium. But there was still upset that Ireland’s third city was left without a voice at the top table.

When the junior ministries were announced a few days later, however, Fianna Fail’s Niall Collins was made Minister of State at the Department of Higher Education.

His County Limerick rival Patrick O’Donovan received what many feel is the most ‘senior’ of the junior portfolios, with the responsibility for the Office of Public Works.

In the city, the man of the moment was Thomondgate's Maurice Quinlivan, whose second tilt at Dail Eireann saw him top the poll, with 11,0006 first preference votes, smashing through the quota.

Storm Maurice was how the Leader hailed the win, a nod to Storm Ciara, which brought snow, winds and ice the same weekend to Limerick.

Mr Quinlivan’s vote haul left his old nemesis, a chastened Willie O’Dea – who received a massive 19,082 poll-topping votes in 2007 – waiting until the second count to be elected, chalking up 9,198 votes, making a dash to South’s pub for a low-key celebration.

Speaking this week, the new polltopper pinpointed a moment in the build-up to election day when he felt things could be different for Sinn Fein this time.

“I was out with around 40 people on a Sunday night, and we were at the St Brigid’s, St Patrick’s Road area, and the response we had was phenomenal. Another area was Wolfe Tone Street. We topped the poll in boxes in both those areas. But it was that event that everyone thought something special is happening here,” he said.

Elsewhere in the city, Fine Gael TD Kieran O’Donnell took the third seat, and then it was a battle royale for the final seat, with northside council rivals Frankie Daly and Brian Leddin going toe-to-toe.

Although Cllr Daly had led initially as the counts went on, it was a strong transfer from Labour’s Jan O’Sullivan – who bowed out after 22 years in the Dail – which saw the Green Party man over the line, Eamon Ryan’s party also benefitting from a move away from the Civil War parties.

In County Limerick, the Green wave was not felt as keenly – but the Sinn Fein surge did impact, as Séighin Ó Ceallaigh – who lost his council seat in underwhelming fashion the previous May – came from nowhere to find himself in the mix for the final seat.

Having opened up a clear lead after the first count, Mr Ó Ceallaigh of Bruff says he remained “pessimistic”.

“I know the transfer game. I realised we were in with a shout, but it was going to be a very long night,” he said. “We expected to be there or thereabouts.”

Ultimately, the rural Limerick constituency was one of the few in the country not to return a Sinn Fein TD.

Fianna Fail’s Niall Collins had to wait until the fourth count for his election, while Fine Gael's Patrick O’Donovan was returned on the following count, his running mate Tom Neville missing out.

It was then time for history, as Richard O’Donoghue became only the second ever Independent elected in Limerick.