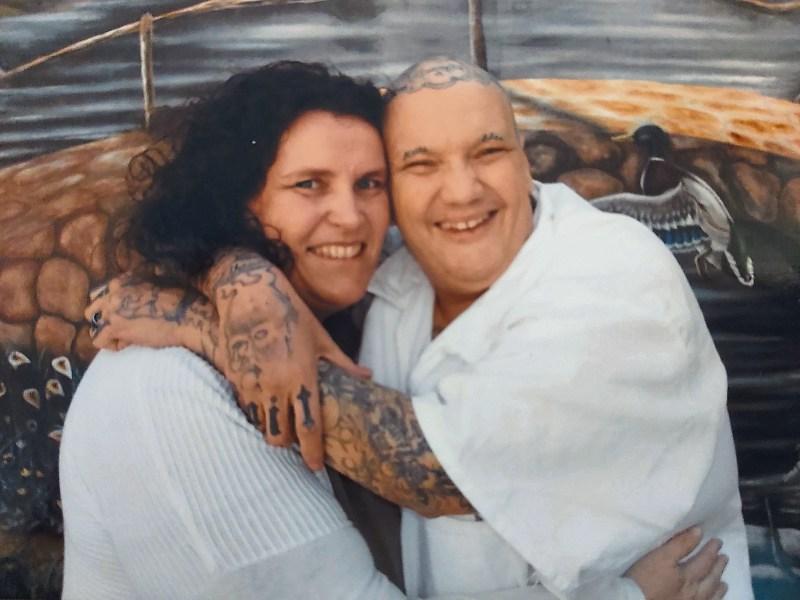 A marriage made in prison: Heike Phelan, who lives in the Kilmallock area, and William Matthew Schiffert, serving a 75 year sentence

THERE are many crude jokes about marriage being like a life sentence but for one Limerick resident it is true.

Heike Phelan, who resides in the Kilmallock area, has married a man serving a 75 year sentence for murder, in a Texas super-maximum prison.

She doesn’t shy away from the strangeness of the story which is more akin to a US cable TV station series than a Limerick Leader article.

“It’s bizarre, isnt it? I sometimes think, what?!” said Heike in a broad Yorkshire accent. The 52-year old grew up in England but returned to her dad’s native county in 2005. Heike, the name coming from her German mum, has just released her third book called Convict Code about her husband’s life in a US prison.

The obvious question the Leader asked is how does one fall in love with a person incarcerated in a different continent?

“Years ago I had a friend in a Californian prison and I've been writing to him for years. I'd known him through somebody else. This one year I participated in a Christmas cards swap through a support website called prisontalk.com I put his name forward for members on there to send Christmas cards to cheer him up and then I had to send a load of cards to others.

“They gave me a list of people to send cards to and one of the cards I sent ended up with my now husband's friend. He said, 'Oh I don’t want to be writing overseas, I can't be bothered with all that’. So he said to him, 'Here, do you want it?'. He said ‘Oh yeah I'll have it, I have all the time in the world'.”

Heike then received her first of many letters from William Matthew Schiffert in 2019.

“That wasn't the intention of sending Christmas cards. It wasn't about writing back – it was just a cheer up thing. I got this letter unexpectedly, right out of the blue.”

That one letter quickly became three or four a week.

“A relationship didn’t interest me at that point. It was not intended, I had no interest. I had never been one for bad boys. It took me a while before I started writing and I said to him in the very first letter, 'If I get any hint that you're lying or not being straight with me then that will be it’. I have no interest in that. I'm not playing mind games."

"When you are getting three or four personal letters every week, especially if you are cynical and are looking out for red flags, you get to know somebody very well through personal letters. It was about 18 months after we had been writing back and forth when I went out to visit him because part of me wanted to see if the person on paper and the photos matched up.”

When they met behind plexiglass William did match up to that person. Those three or four letters a week turned into three or four visits to Texas every year. But how does she reconcile herself with the fact that William is a convicted murderer for his role in a fatal knife attack in 2001.

“From the start it was just meant as a Christmas card cheer up and we started just as friends. What he did was before I ever came in to his life. We talk about what he has done and what he is in prison for now. He is a different person now to how he was then. That happened 20 years ago. He is coming up to 52 now as well.”

For the first few years their visits were behind plexiglass because he was in segregation for three years. Indeed, their first contact visit was sitting at a table face to face a year after they were married in 2012. So how did they wed?

“We didn't really have a wedding day in the normal sense. At the time Texas didn't do wedding services in prisons. So we had to do a proxy wedding. We both had to fill in the paperwork, and I had to take it to the courthouse to get the marriage licence. We had to wait 72 hours from the issue of the licence to being able to book a day.

“A proxy wedding meant I would need a stand in for William. On the day, I turned up at the courthouse at the required time. The judge asked me if I wanted to go through a whole ceremony with a stand in, and he offered the use of his secretary. Or did I just want him to fill in the paperwork and sign the marriage certificate. I went for the second option, just sign it all off. That was it. Very romantic!”

Eight years on and they have lasted longer than many marriages, athough Heike hasn’t seen him in a year now due to Covid. But she would love for him to be released and to live together.

One wonders what William would make of County Limerick.