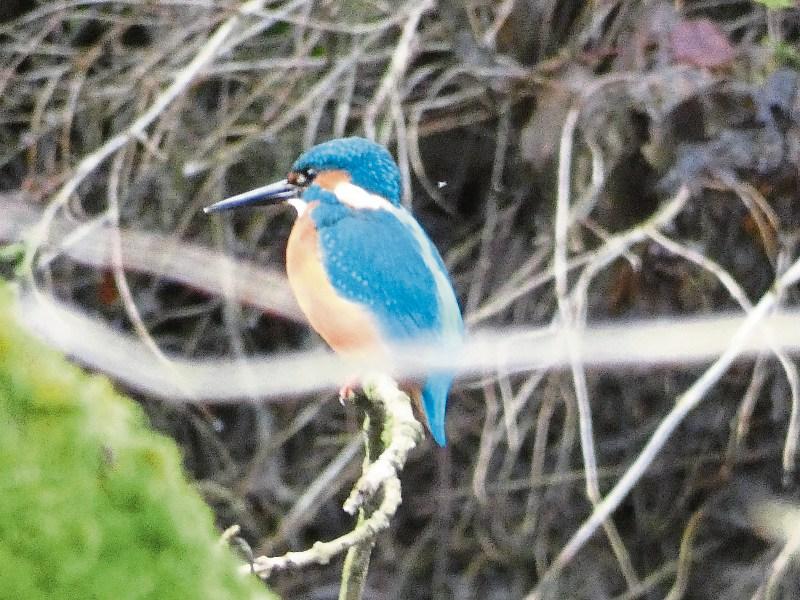 Reader Shane O'Brien sent in this lovely photo from Castleconnell

WITH the car full of shopping and the evening still young we decided to take a walk. We parked beside the quite Odeon Cinema and through the open car window I could hear a song thrush singing. This bird starts around mid-December and is a sign that while we might be in the depths of winter nature is already planning for spring.

As we crossed the busy road the street lights were just starting to flicker on. Cars flew by but they only needed their dims on for safe driving. Despite the mass of buildings and people nature still thrives and is waiting to be discovered.

Our first bird is a pied wagtail. He is black and white with a long tail and feeds on insects and seeds. Starlings flew overhead in little groups of half a dozen birds. Later on they will come together in their thousands to roost and exchange musical stories of their day.

In front of the housing estate mature popular trees have been topped and a tall stump left. This will be quickly colonised by solitary bees and the larva of wood boring beetles. Birds will also eat these insects and this is a good way of making trees safe while benefiting wildlife.

A native hedgerow was retained during the construction of the houses. It main tree species is the native hawthorn and this supports dozens of species of insects, caterpillars and birds. There are also a few tall sycamore trees that are covered in ivy. The latter has plenty of dark berries that help sustain birds and animals during the cold winter months. We heard a robin singing from the hedge and he has claimed a good breeding territory for himself.

In front of the hedgerow there is a small area of standing water and this is a rare habitat in built up areas. This is an important drinking and bathing place for birds and animals.

As we walked along a pair of magpies flew around the back of the houses. We heard the chuckling calls of jackdaws as they investigated the potential chimney pots for nesting. There was not many opportunities as all the owners had guards up.

At the front of the car park alder and weeping birch had been planted. These trees are ideal for urban areas and can survive the fumes from heavy traffic.

In a small green island Mountain ash was growing. This has summer flowers for insects and berries in autumn for birds. Around the base of the tree a few wildflowers had escaped the mower. Dandelion whose yellow flowers attract bees and chickweed with small white flowers are good for insects.

On a bare piece of ground nature has sown its own wildflower garden. Sow thistle, nettle, nipplewort, groundsel and bittercress are considered to be weeds by many. But all of these precious flowers support out under pressure bees and other insects species.

Next we took the road past the Kilmurry lodge hotel. The hedge here has an exotic feel with griselinia the main species. Been evergreen this provides good shelter for birds during cold and wet weather. Berberis bright orange flowers are a magnet for bees and the long blooms of buddleia are a feast for butterflies.

Ivy and bramble have also established in the hedge creating additional food for nature. At the base cleavers or goose grass is just starting to grow.

This is the plant that kids or adults like to stick to each other’s backs. A single oak tree has started its century’s journey and it may live for 500 years. In front of Vistakon there is a tightly cut beech hedge and its management leaves little space for wildlife.