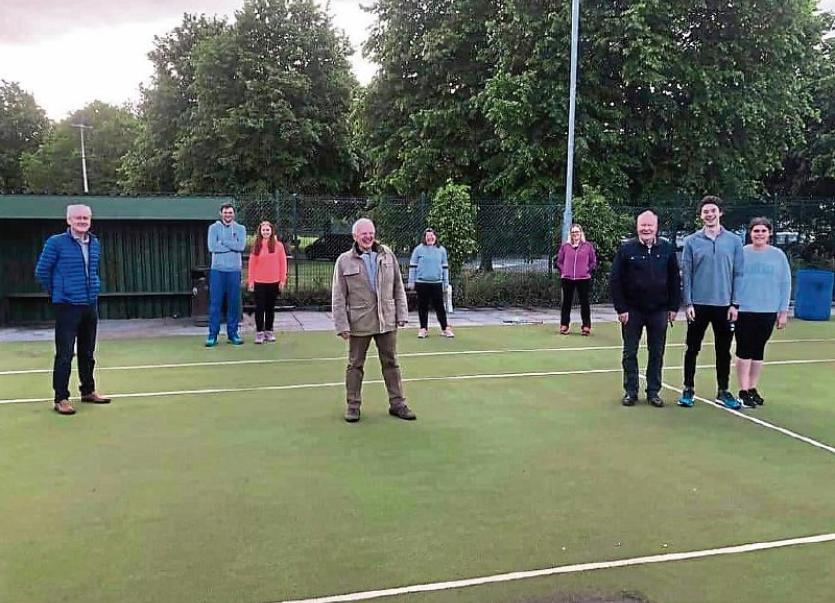 COVID may have stopped tennis being played in Newcastle West currently but the pandemic is what got the club back going again.

Cllr Tom Ruddle recently got a grant of €55,000 approved by the council for fencing and flood lights. Cllr Ruddle said the courts had fallen into complete disrepair with several attempts to revive the club over the past few years failing.

“On social media there seem to be a great demand for people to play tennis. It is a game that can be played by young and old. It is an Ideal game for families to play together. I decided during the first Covid lockdown, along with my son and daughter, and five other interested people in getting it up and running. We spent a couple of weeks pulling weeds, cutting grass and getting the courts cleaned up,” said Cllr Ruddle.

The history of tennis in the town dates back to 1929 and almost 100 years on many still love the game.

“When we opened up for membership, we could not believe the tremendous demand for tennis in the town and surrounding areas. We now have over 500 members aged from six to 70. It has been a massive success,” said Cllr Ruddle.

In a presentation to councillors in the Newcastle West Municipal District, he said the facility needs investment to keep it going.

“Fencing will provide proper security for the facility. In the past we had people breaking in and doing harm.

“Flood lights – part of infrastructure is already there – will ensure all year round enjoyment of the facility. To build this facility from scratch would cost in the region of a minimum of €300,000,” said Cllr Ruddle, who received the backing of his fellow councillors for the sum of €55,000.

He plans to link the tennis courts with local hotels and B&Bs to enhance the town’s tourist offering.

“This will be an extra attraction in conjunction with the increase in tourism we will have with the reopening of the Greenway,” said Cllr Ruddle.

The courts will also be available to the Brothers of Charity service users. “We hope to start a tennis programme for children with disabilities and special needs, said Cllr Ruddle.

Now, all we have to do is smash Covid.