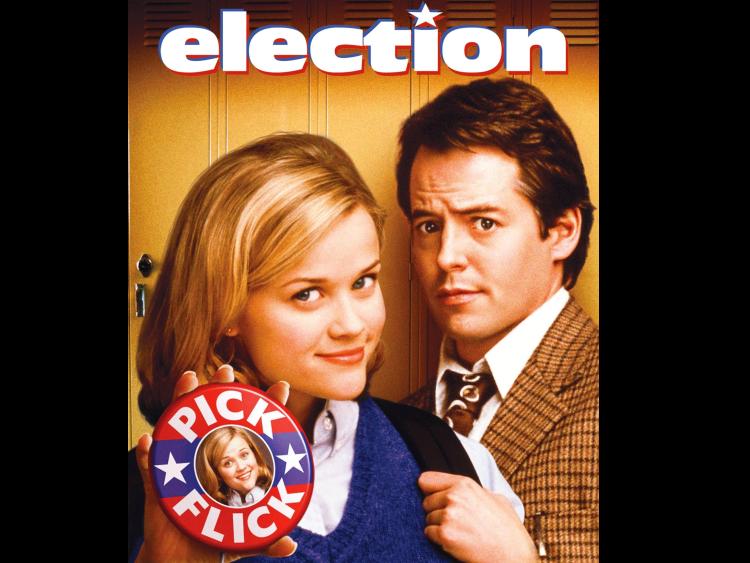 The excellent Election is on Sunday night

NWA. were the most notorious rap group of the 1980's and this film charts their meteoric rise from the mean streets of Compton to their spectacular and egotistical fall. A big, brash, profane film that skips over a lot of the more troubling aspects of the group but still manages to hit the spot. Great performances from Jason Mitchell, Corey Hawkins and O'Shea Jackson Jr ( as his Da Ice Cube) make it all work.

Aaron and Justin had a strange childhood and as adults they think they've escaped it until an odd message forces them to revisit their past and deal with it once and for all. From directors and lead actors Justin Benson, Aaron Moorhead, this is a bizarre blend of drama, mystery and science fiction but it really works. It's a film that will change the way you look at religion, memory and family. Well worth your time.

An American truck driver in Iraq is kidnapped and wakes up buried in a coffin. All he has is a cigarette lighter and a mobile phone. His air is running out fast. Can he escape in time? If you are anyway claustrophobic I'd advise you avoid this like the plague but if you think you'll be able for it, it's a suspenseful and quite terrifying little tale. Ryan Reynolds carries the entire film on his shoulders and does a first rate job.

Man and boy. Father and son. A nameless duo living a peaceful life in rural Norfolk. All is grand until Man gets called back to work. The work is dangerous and it leaves a lasting effect on boy.  This 2015 psychological thriller is an interesting but tough film that will leave you with a lot to unpack when its over. A super pair of performances from Barry Keoghan and Denis Ménochet will keep you watching.

A woman returns to her home town for a family event. Years before she faced a terrifying ordeal but got through it. Now she's back and things are stirred up again. Might she get real closure on the events of the past? Warning - this one is harsh, it's a horror film that may offend you and one that will definitely disgust you. But, Angela Bettis as the lead puts in such a good showing that you'll be glued to it throughout.

Tracy Flick is the perfect student. She can do no wrong. This gets under the skin of her teacher Mr McAllister something fierce. So much so that it starts to affect his life. Alexander Payne's 1999 comedy is a cracker. Reese Wetherspoon is fantastic as student you'll love to hate and Matthew Broderick does masterful work as a teacher who takes his work way too seriously. Chris Klein as dumb jock Paul is priceless.

1980. A violent time in Korea. A taxi driver is hired by a foreign reporter to drive him from Seoul into a warzone. A lot of money is offered for the trip. Too much money to turn down really. But will the cash outweigh the hassle? Led by a mighty turn from Kang-ho Song, star of last year's Parasite, this is a look at part of history unknown in the west and one that isn't afraid to let it's warmth and humanity shine through it's darker moments.

Lorraine Broughton is a British spy on a mission in Cold War Berlin. An SIS agent has been murdered and she must use her special set of skills to figure out who did the deed and why. The film itself is a little muddled and messy but Charlize Theron is on fire here and a couple of spectacularly violent and brilliantly put together action scenes will pin you to your chair. James McAvoy is fun as a fellow man at arms.

The film where Donald Sutherland plays Homer Simpson. Yup. The 1930's were a bad time in America and people flooded into Hollywood to find fame and fortune away from the Great depression. It worked out for some and not for others. A vicious and biting satire of the film industry. Flamboyant and extravangant in places, downright horrifying in others. It's excellent though and packed full of famous faces.

Warren, Chas, Spencer and Eric. 4 bright young college students. 4 young men who really should have known better than to plan a heist from their own university. A story about pretentious fools who think the world revolves around doesn't sound like fun but this is one really gripping film and one that mixes  in documentary footage to great effect. Nicely shot, wicked soundtrack and our own Barry Keoghan in the mix. How could you go wrong?

A fashion photographer develops psychic abilities that allow her to see through the eyes of a serial killer as he does his dodgy deeds. Somehow she has to figure out a way to use this skill against him. An unusual but well put together story and one filled with genuine suspense that also gives us an authentic look at New York in the 70's. Faye Dunaway nails the lead and Tommy Lee Jones is reliable as always. Nice supporting cast too with Brad Dourif and Raul Julia in tow.

After a horrible tragedy, Edith finds herself living a new life in an old mansion with her new beau. Strange occurrences have followed Edith her whole life though. A gorgeous gothic tale from the mind of Guillermo Del Toro. Scary in places, gruesome in others and atmospheric as hell. Record it and keep it for a dark spooky night. Or just watch it at 1.45am! Mia Wasikowska, Jessica Chastain, Tom Hiddleston and Charlie Hunnam all deliver the goods.

When his daughter Margot goes missing, John is understandably freaked. The cops aren't finding anything so John gets to work himself and the first place he looks for clues is on her laptop. Searching takes an age old tale and puts a modern spin on it and the result is a wonderfully unique and twisty turny experience. It won't age the best but it's very of the now. John Cho does fine work in the lead role.

Joe owns a tree felling company. A boy called Gary asks him for a job. The two get on well. Then everything goes to hell for both of them. This 2013 drama is a tough but compelling watch about the parts of America and the people living in them that tend to be forgotten about. You won't leave this one in a good mood but you'll be glad you watched it. Nicholas Cage and Tye Sheridan are good in their roles but unknown Gary Poulter who died just before this came out puts in a stunner of a shift.

A young wannabe music journalist blags his way into a concert to write an article about a rock band and soon finds himself way out of his depth. This film rules. Ye are going to love it. Cameron Crowe's 70's set comedy drama is a glorious evocation of the period and it's filled with unreal music. It doesn't hide from the darker side of the times either. Patrick Fugit rocks the lead but Frances McDormand and Kate Hudson own this film.