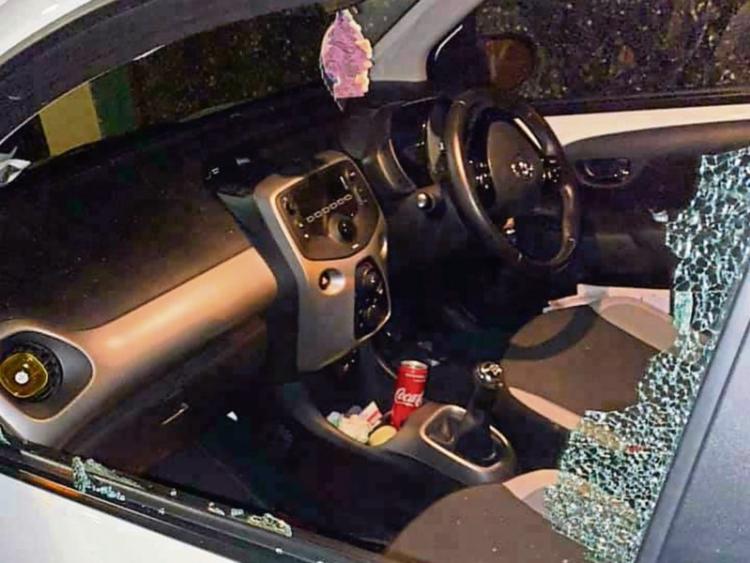 TEENS running amok in Kilmallock for months reached a new low over the weekend when a rock was thrown through the passenger window of a moving car.

The young female motorist, who was returning home from work, was understandably shaken as glass shattered all around her.

Local councillors, PJ Carey and Mike Donegan both expressed their disgust at the incident.

A garda spokesperson confirmed they are investigating an alleged incident of criminal damage to a vehicle that occurred in Gortboy, Kilmallock, on Saturday evening.

“No arrests have yet been made and investigations remain ongoing,” said the garda spokesperson.

The perpetrators are a gang of teenagers who have been causing trouble in the town for months.

At last month’s Joint Policing Sub-Committee meeting of the Cappamore-Kilmallock  Municipal District, Cllr Donegan said there had been some high profile incidents in Kilmallock in November.

“Groups of youths were throwing stones at cars. I got numerous reports of cars being damaged. Windscreens were damaged,” said Cllr Donegan.

Saturday night’s frightening incident is an escalation in the anti-social behaviour.

Cllr Carey said it was a “terrible fright to get” for the motorist.

“It could have caused a bad crash. She has the trauma of it and the cost of repairing it. Something has to be done. It is an ongoing problem. I’ve had quite a number of reports of this behaviour but this is the most serious,” said Cllr Carey.

Cllr Donegan said it is “spiralling out of control”.

“Thank God the young girl was OK. It is not he first time. I know two weeks ago they threw a sheet of ice at a lorry driver who had his window down. It hit him in the face. Windscreens have been broken. You’d get such a fright. There are a number of incidents. They are doing what they like – they are running amok,” said Cllr Donegan.

He also received reports of lanterns being smashed on the bridge on Wolfe Tone Street at the weekend. It is believed the gang used catapults to fire rocks at the lights.

“It is all in darkness down there now,” said Cllr Donegan.

Both he and Cllr Carey urge anybody who has had stones or rocks thrown at their vehicles or property to ring gardai and make a formal complaint. The two councillors are also calling for an increased garda presence and patrols in the town.

Cllr Donegan said: “I’ll be asking the superintendent to meet with a delegation from the community council and community alert group. They are the bodies we have in the town that manage our communities and raise the issues that we as local representatives have been raising at meetings in relation to this.

“I know with the restrictions we can’t physically do it but I can set up a zoom call. I know the gardai are doing their best and they are stretched to the limit. That’s why I would encourage people to log any incident into the pulse system because that’s what shows up when we are looking for extra gardai,” said Cllr Donegan.

Cllr Carey called on parents to take more responsibility and know where there parents are after dark.

“It’s just a few bad apples. It is a shame. We coach young lads in the athletics club and community games and there are a great bunch of young lads in Kilmallock. It’s only a handful who are at this,” said Cllr Carey.

Both Cllrs Donegan and Carey agree there is a lot of worry and concern in the town and especially after last weekend’s escalation in criminal damage.