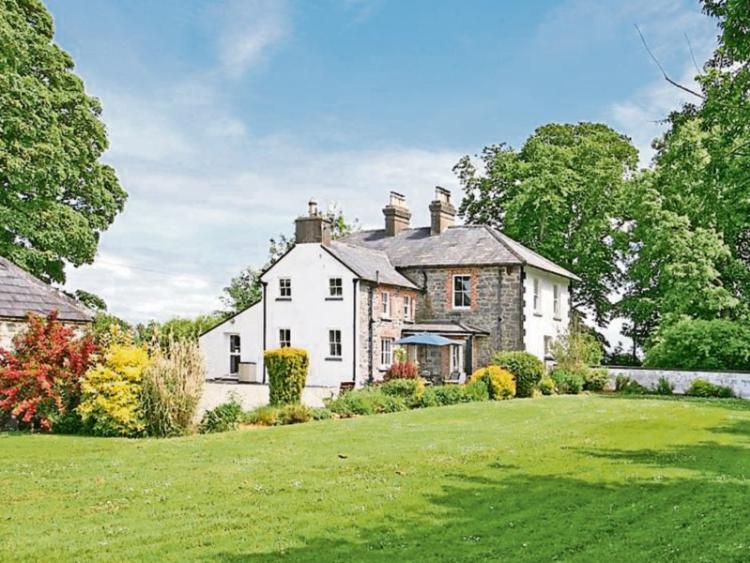 Lacrough House in Boher was sold by Sherry FitzGerald Limerick late last year. The last owner was an LA-based interior designer who worked for movie stars like Clint Eastwood and Antonio Banderas

The most recent owner was Los Angeles-based interior designer, Brigid McCormack. The Limerick woman has worked for Clint Eastwood, Melanie Griffith and Antonio Banderas. However, it is the Frend family that Lacrough House is most associated with. Their own history is one worthy of a Hollywood movie.

It features the First Viscount Gough of Goojerat and Limerick; Louisa Frend being killed after the steamship RMS Leinster was torpedoed and sunk by a German U-boat; sportswear entrepreneur Lewis Lacey who inspired Lacoste and later Ralph Lauren; and many more Frends. More on this anon.

In an interview with the Irish Independent during the summer, Ms McCormack said she bought the four bedroom property on 10.5 acres in 2016 following the tragic passing in a car accident of her husband, Herbert Lundberg. She purchased it from the O’Connell family who left it in immaculate condition. They are part of Limerick horse-racing royalty as opposed to Hollywood royalty.

Over the last four years, Ms McCormack brought her celebrity decorating talents to her own home in Boher. A new paint scheme, bathroom, Aga, and furnishings are just some of the tasteful additions she made to Lacrough House. 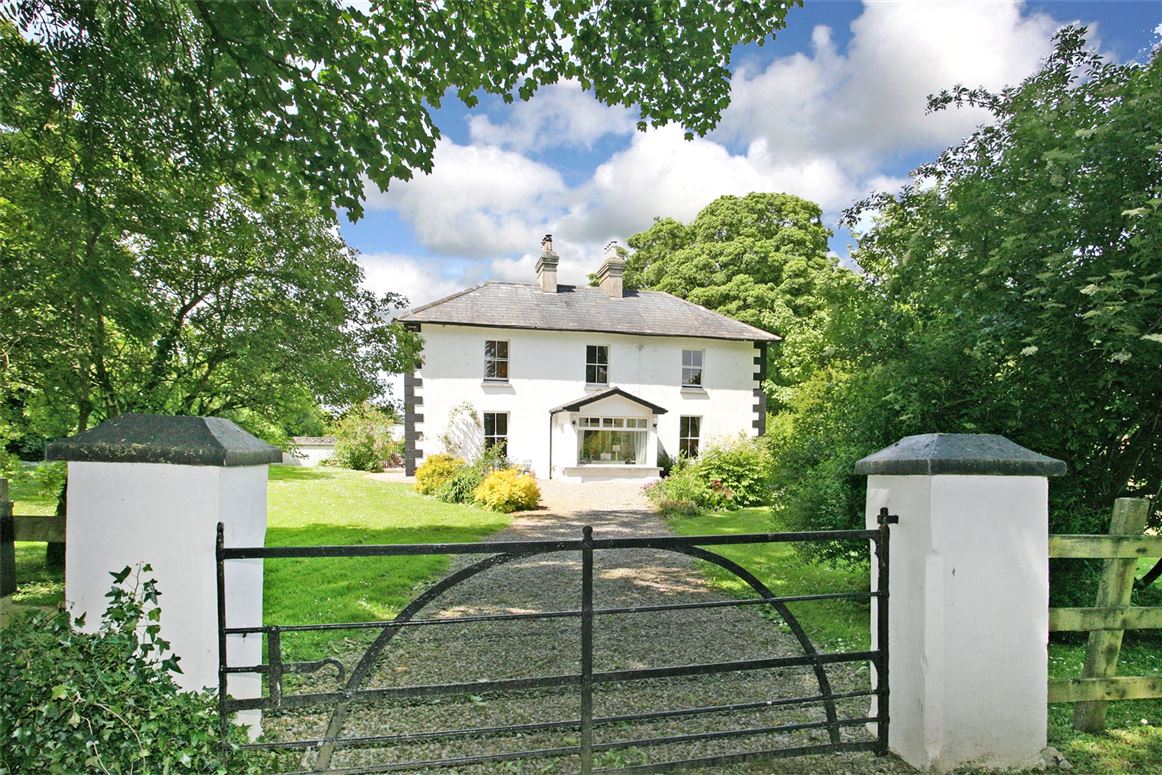 The uniqueness of the property was reflected in the high level of enquiries said Ailbhe O'Malley, Director of Sherry FitzGerald Limerick.

“We had a number of interested parties,” said Ms O’Malley, who confirmed the sale went through late last year. The Leader understands it sold for around the asking price of €650,000 and a family will be the new inhabitants.

One arrives at Lacrough House via a long, curving driveway. Totally hidden by mature growth and foliage, the property enjoys an unrivalled degree of privacy. Entering via the front porch, you come through to a magnificent entrance hall, with both reception rooms to your left and right. Beautiful wood panelling, high ceilings and understated warm colours set an elegant tone which continues throughout the house.

Both the living room and the dining room offer exquisite period details, by way of imposing feature fireplaces, original ceiling cornices and architraves at every door. At the windows, deep sills speak to the depth of the old stone walls - with authentic sash framing the greenery of the gardens. French doors from the living room provide access to the covered garden patio, and back into the house via the kitchen. With a bright cream Aga at its heart, the kitchen has been upgraded to the highest specification while retaining its rustic country charm in every regard. Flooded with light from all sides, double windows open to create a seat overlooking the garden, with a further breakfast/lounge area extending from the opposite wing. A generous utility and downstairs bathroom is also accessible from the kitchen. 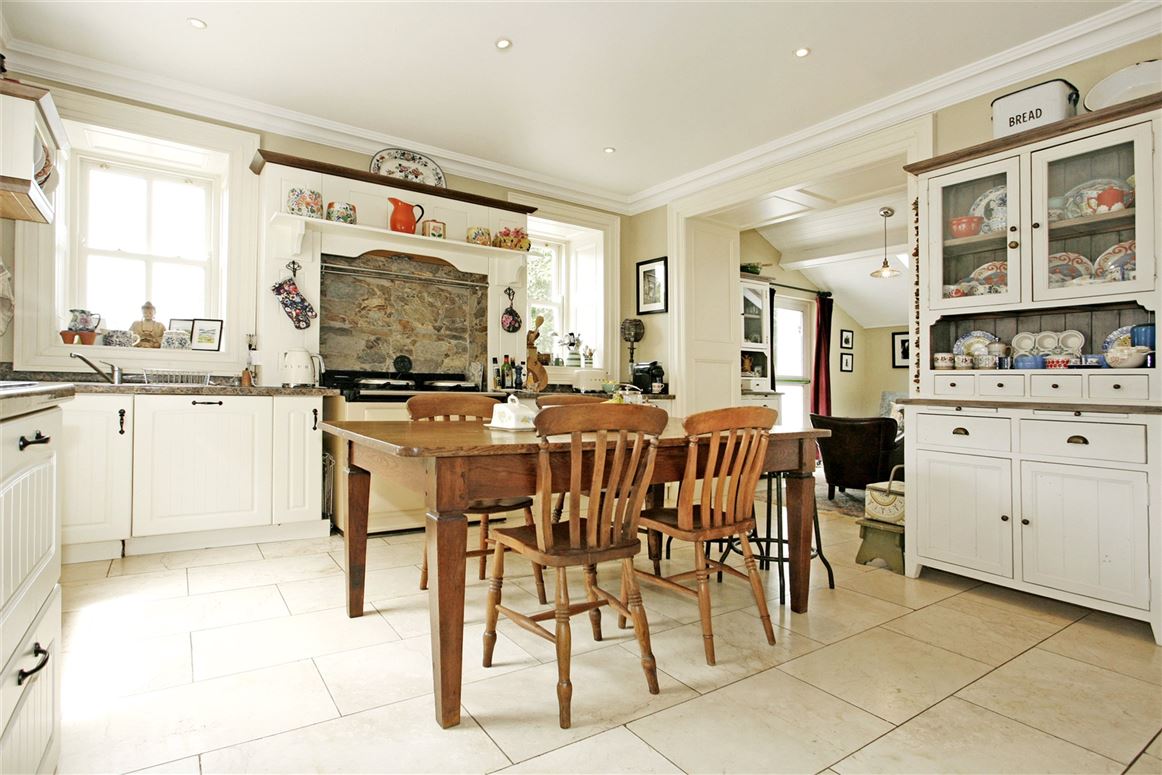 Upstairs there are four beautiful bedrooms, each with their own character and distinct feel. Solid cherry-wood floors perfectly complement each room, being dual aspect and afforded plentiful natural light. In addition to two beautifully crafted ensuites, the main bathroom is particularly special. A perfectly placed free standing bath is set toward the window, offering a spectacular view over the gardens and sprawling countryside below.

Outside, meticulously cultivated perennial flowerbeds border the rear courtyard, generously wrapping around the side of the house. Numerous outbuildings have been lovingly attended to, work which included a complete re-roofing of the stables and fitting of solar panels. What were formerly stables are laden with charming reminders of their past, with a separate coach house bordering the walled orchard.

And it is this past that makes Lacrough so special. Some years ago, former Limerick Leader archivist, Grainne Keays, delivered a fascinating presentation called The Frend Family of Lacrough House: The Story of a Boher Family. Her alternative title was From Lacrough to Lacoste.

The house dates back to the mid-1800s. The Frend family were minor gentry, related to the aforementioned Lord Gough.

After William Frend’s death in 1861, aged 53, he was described in the Limerick Chronicle as, “One of the kindest of fathers, and best of husbands, respected and esteemed by all who had the pleasure of his acquaintance”. His wife, Charlotte Frend, died in 1899, having outlived four of her seven children.

Their eldest son, Thomas, inherited Lacrough. He died from pleurisy in 1891. The last Frend to live in Boher was his younger sister Louisa. She died in the final weeks of World War I after the steamship RMS Leinster was sunk in the Irish Sea. 501 on board perished.

The fifth child - John Arthur - sought the sunnier climes of Argentina. He was the only one of the seven siblings to marry. One of his daughters - Nora Amy Charlotte Frend - married professional polo player and sportswear entrepreneur Lewis Lacey. He developed polo shirts embossed with the logo of a player astride a pony. In 1933, French tennis star Rene Lacoste, known as ''le Crocodile'' produced his own brand. In 1972, Ralph Lauren introduced a version featuring his own polo-player motif.