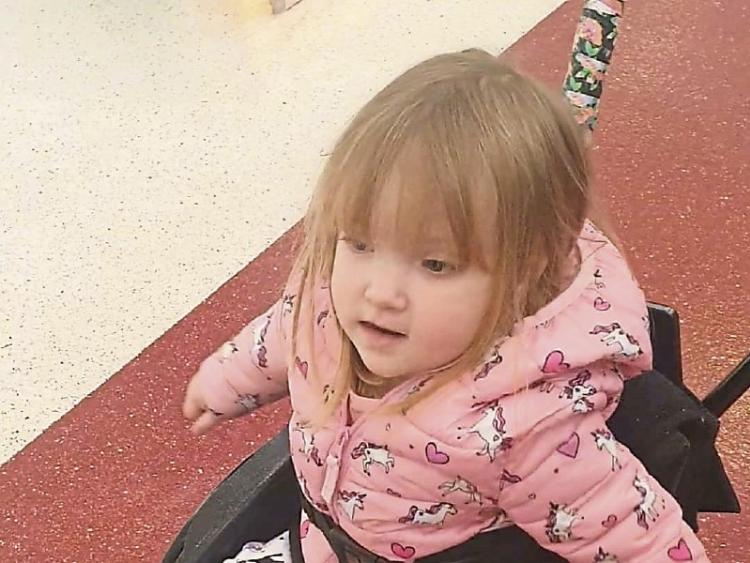 Little Mia, who turns 3 this week

A LIMERICK mother whose daughter’s wheelchair was stolen before Christmas has made a heartfelt plea to the thieves to return it.

Sarah Farrell and her family say their festive season was “ruined” after her two-year-old daughter’s custom-made chair was taken from outside the boot of the family car when it was parked outside her mum’s house in Knockainey.

Born with spina bifida and hydrocephalus, Mia is paralysed from the ribs down.

She turns three this week, and getting her lifeline back would be the best birthday gift ever, her mum said.

In a direct appeal to those who carried out the theft on December 14, Sarah said: “Just leave the wheelchair somewhere, if you still have it. Contact the gardai, use a private number. You don’t have to say who you are or where you are from. Just leave it somewhere so we can get it back. It’s all we want.”

The wheelchair is small, with tape and flowers on the back handle, and the rest is plain black.

“They don’t realise what this is doing to her. She is heartbroken. She is doing an army crawl across the floor to get around. I know she is only a child, but she was so used to having a wheelchair and getting around. She can’t express her thoughts, as she doesn’t have great language skills​. But you’d know by her she is heartbroken,” her mother said.

Sarah has thanked people for their generosity since the incident.

“People have been really fantastic. They’ve dropped in vouchers for Dunnes. One man dropped a big bag of toys for Mia into the garda station at Bruff,” she said.

But despite all this, she said Mia is still suffering.

“She has not eaten a bite since the chair went. It’s horrendous to be quite honest, and you know Christmas is bad enough trying to get the right gifts for everyone,” she added.

Bruff gardai continue to investigate the theft, and are available on 061-382940.