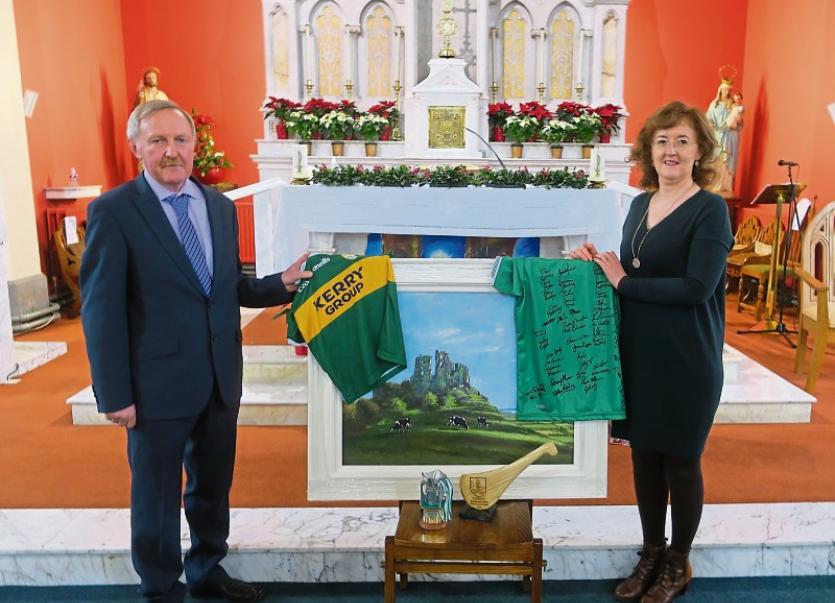 Joe Lyons and his successor Sheila Hayes, with a gift of a signed Limerick GAA jersey, a Kerry jersey, and a picture by local artist Jim O’Farrell

THEY say retirement is a time when one can kick back and relax, and take things easy.

But that won’t be the case for the hugely popular Ballybrown National School principal Joe Lyons, who brought the curtain down on his 41-year teaching career just before Christmas.

This is because Joe – principal in Ballybrown for 16 years and a former Lisnagry NS teacher – will once more team up with former Patrickswell principal Ciaran Crowe to write more GAA-themed books in 2021.

Among those will be a history of his beloved Cumann na mBunscol – the programme which has bred a love of GAA among schoolkids across Ireland – and which reaches its 50th anniversary later in the year.

The Castleisland man is no stranger of course to being in print, with his book, co-written with Ciaran, At Last, proving popular in the wake of Limerick’s 2018 All-Ireland hurling win. He is also co-editor of the well-loved thrice-yearly magazine Green and White, which highlights the  Cumann na mBunscol activities across the city and county.

The teacher enjoyed a wonderful send-off from Ballybrown National School last week, with students joining in to sing specially produced songs for him. While his respect in GAA circles was acknowledged, with a number of the MacCarthy cup winning team recording video tributes.

In this number were Tom and Dan Morrissey, who were taught by Joe when they were in Lisnagry National School.

He was presented with a signed Limerick jersey, as well as a Kerry shirt as a nod to his roots in the Kingdom!

“We had a great day, even though it was being governed by social distancing. Every teacher and class in the school played their part. The children were in the classes, and we were in the office. But everyone wanted to be involved. All the kids from junior to sixth put on their own little show for me. Artwork was done up wishing me a happy retirement. Every class performed a little song or a dance, even down to the junior infants who made up little songs for me. The teachers also did a line dance,” Joe laughed.

Sadly, due to the social distancing regulations, Joe had to watch a lot of his send-off from the staff room, with the kids performing their pieces to camera.

He was delighted with one group of students in particular, who, word-for-word, recited a number of Robert Louis Stevenson poems he had taught them some years previously.

Sheila Hayes, who has worked in Ballybrown National School since 1992, takes over as principal. Joe has just one piece of advice for his successor: “Just be yourself.”