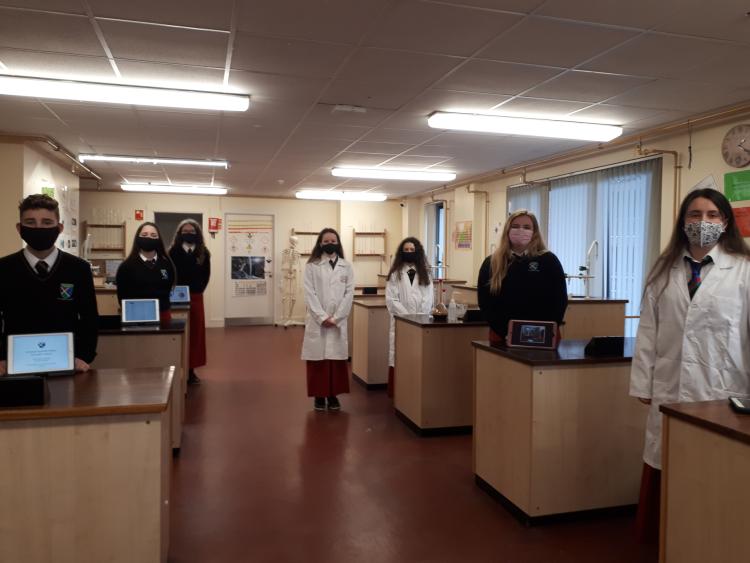 THERE are some exciting projects on the way to the Young Scientist contest from Gaelcholaiste Luimni in Sir Harry’s Mall.

Two of its students have placed a focus on medical projects, one group is looking at the intake of iron in both a vegetarian and an omnivore diet, and there is also a look at the thorny issue of gender representation in politics.

For Sarah Moloney, 17, it was her grandmother’s experiences when taking her medication which inspired her to design a pill dispenser.

Unlike other products like hers on the market, the high-tech device has a special functionality, which will place a stop on any patient taking the wrong medical combination.

Sarah said: “The patient will have a fob, like a bracelet or a keychain and it will scan and dispense the medication. They’ve to scan it again before the next medications are due to be taken.”

An SOS button on the machine would trigger a message to a pre-designated number to alert them if they cannot access their medication.

“The idea came from my grandmother. She had cancer. There were always problems with her medication. She would always miss them and end up in hospital. I always wondered if there was a way we could make things better,” the student added.

In the same vein Cedhla ni Chaoimh, 15, is looking at telehealth

“My project is to investigate the use of telehealth among older people living in Ireland, mostly alone. Especially during Covid-19, homecare is deemed a high-risk of contracting the virus. Telehealth is the delivery of healthcare via remote technology on apps, mobile phones using sensors and smart watches,” Cedhla explained.

She tested her project on her Nanny, buying her a sensor and smart watch.

She wore it for 10 weeks, and it picked up her heart rate, activity levels and sleep quality.

After starting the study in October and completing just before Christmas, the results were positive.

“I noticed how much better she was knowing people were looking after her and keeping an eye on her health and wellbeing,” she said.

Aoife McGrath, 13 and Kate Hanafin, 14, have teamed up to compare the intake of iron in an omnivore diet to the same in a vegetarian diet.

They tested the iron levels in red meat, vegetables and an iron tablet, and also examined various substances including potassium carbonate, an iron tablet solution, and a solution with red meat and vegetables.

The youngest entrants to the contest from Gaelcholaiste Luimni, 13-year-olds Ollie Tierney, Aoibhe Garner and Jane Madden are investigating the gender balance at the genesis of politics – the school student council.

They sent out a survey with eight questions to different schools across Ireland, and received 108 responses.

The research showed that, unlike in politics locally and nationally, where men are dominant, there was a fairly equal spread between males and females on student councils.

Ollie says they hope to take the project forward and look at the gender make-up of county councils, and the Oireachtas, and ask why so few women carry on in politics.