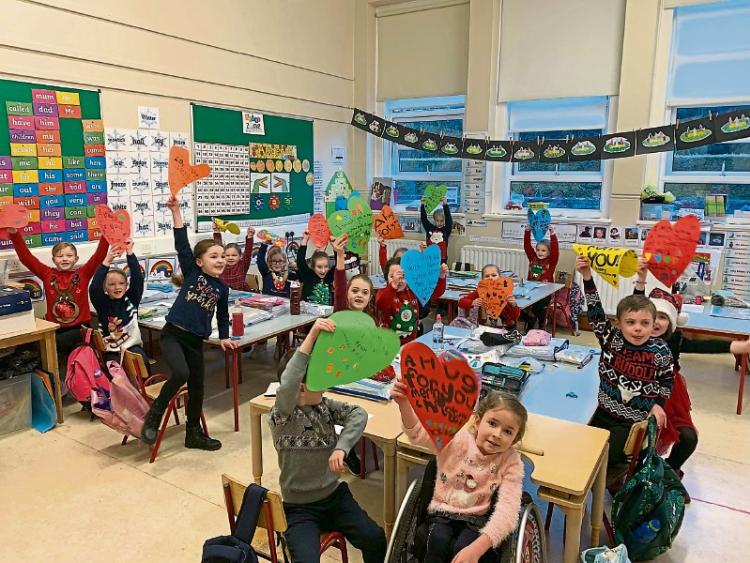 A LITTLE boy who dreams of space travel captured the nation’s hearts on The Late Late Toy Show with his virtual hug.

Oola and Pallasgreen may not be in a galaxy far far away from Cork’s Adam King but his lovely idea has landed there.

“Thank you to Mr Guiney (principal) and his students in Oola NS for taking the time to send us virtual hugs. It brought great joy and smiles to everyone, both residents and staff.

“There was a hug for everyone and as you can see from the photos there was great interest in this surprise. We are blown away and humbled by the support and best wishes being shared with us from so many different groups and schools,” said Sean.

The photos capture the joy as the virtual hugs are delivered by an Elf - Niamh O'Donovan, Kilteely – and Mrs Clause, Amy Moore.

Sean said they have a few very special Oola ladies living with them and one of the pupils, Molly O'Brien sent personalised virtual hugs to them.

“We know Molly very well here and we look forward to having her back entertaining us again in the near future,” said Sean, who thanked each and every one of his colleagues and their families at home for “helping to keep our residents happy, healthy and safe”.

“Frontline workers everywhere are making personal sacrifices every day to reduce the risk of cross infection in hospitals and nursing homes. All departments are working so diligently since early March and hopefully now an end to this is in sight,” said Sean.

After their vaccination day on January 21 hopefully it won’t be too long before virtual hugs become real ones.