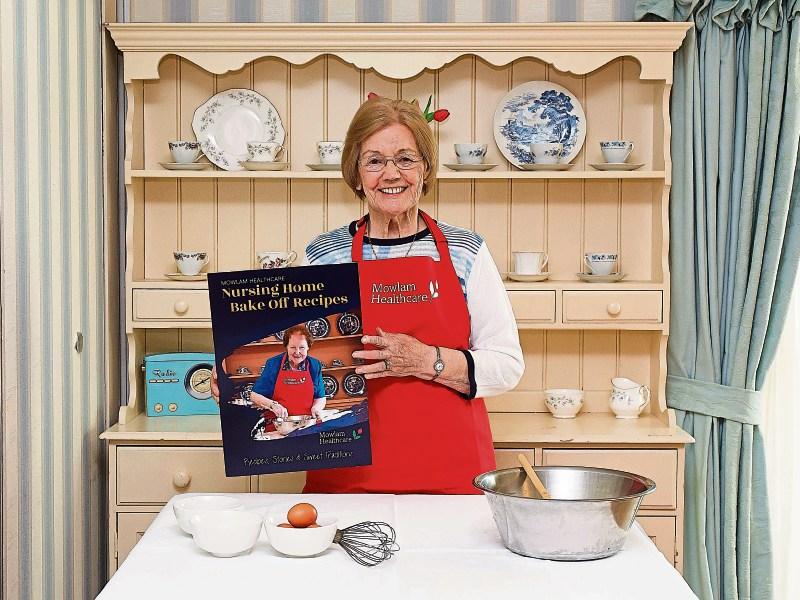 Moira Hillard, 93, a resident of The Park Nursing Home in Limerick, pictured with the new book, which contains one of her recipes

LIMERICK nursing home residents are flavour of the month after contributing to a new recipe book backed by celebrity chef Darina Allen.

The idea to gather a collection of residents’ favourite recipes was inspired by the baking skills of a 91-year-old woman in Ennis Nursing Home.

But it soon became evident that there was a large group of enthusiastic bakers throughout the countrywide group. It led to eight residents of nursing homes across Limerick chipping in with their special recipes.

THE GREAT NURSING HOME BAKE OFF - “What a fitting way to mark the end of our 20th anniversary year enhancing the quality of life of older people in Ireland.”
Joe Hanrahan, Mowlam Healthcarehttps://t.co/Pf249i2SCR@NursingHomesIre #nursinghomes #bakeoff pic.twitter.com/wyL8DGsE9h

They were among 51 kitchen-savvy pensioners living in Mowlam Healthcare nursing homes across Ireland who contributed recipes ­– some dating back three generations.

The 106-page book, which is not a commercial venture, teaches readers how to make simple, yet delicious, desserts. It also tells the stories of the exceptional men and women who shared their recipes.

Darina Allen backed the venture and gifted two of her own recipes to the book.

“I am so happy to support this inspired project, especially in the year that’s in it. Many wonderful recipes and stories of traditional home baking, with skills lovingly passed from mother to child down through the generations.

“Bravo to all the inspirational residents who contributed to the recipe book. How brilliant is it to see them living well and keeping up their skills in nursing home care. Keep baking and carry on,” said Darina.

Joe Hanrahan, of Mowlam, said the group was “delighted to facilitate the compiling and production of this beautiful book”.

“This book was a way of documenting recipes from yesteryear, learning from residents as well as supporting them to fill their days with meaning and purpose.

“While it has been different for residents in nursing homes due to the pandemic and restrictions on visiting, life did go on as normal.

“We are very proud that the skills and traditions of our residents are now in print and copies of the recipe book are being distributed to all Mowlam Healthcare homes,” said Joe.