Pupils at Limerick school build Lego replica of their town 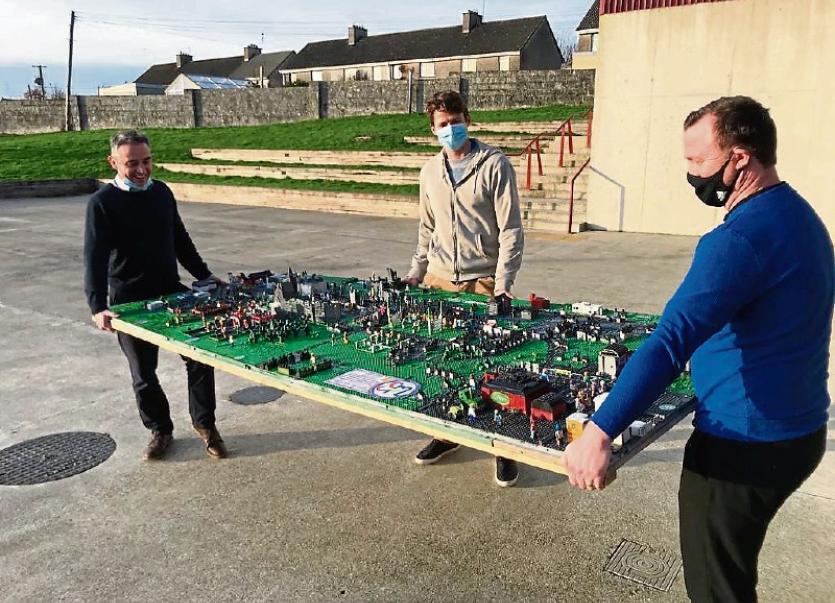 IT may take a village to raise a child but it takes boys and girls over 1,000 pieces of Lego to build a town.

Scoil Mocheallog pupils are delighted to have completed their monster Lego replica of the town of Kilmallock. It is now on permanent display in the library, and is easily visible through the window.

It is adorned with Limerick flags in honour of our All-Ireland winning hurlers just like the town’s Kings Castle was before the final.

Construction commenced early in 2020 by fifth class pupils in teacher John English’s class but came to an abrupt end when Covid struck.

On return to school, the project recommenced and was finished by the present fifth class pupils, said Mr English. The piece is eight feet long and almost four feet wide.

Over one thousand pieces of Lego, all sourced by the children, were used in the build.

“The motivation was twofold – educational and to foster respect for our town and that the children recognise the huge efforts made to keep the town looking so well, both by paid personnel and volunteers,” said Mr English.

This really struck a chord with the children who decided to dedicate the artwork to the memory of John Tierney.

“John worked tirelessly cleaning and promoting the town in any way he could. He had a strong link with our school and aided us with clean ups, tree planting and other pursuits. John was a gentle soul who left a huge footprint on our town,” said Mr English.

He up with the idea for a Lego replica of Kilmallock after doing a summer course on STEM education in the classroom which combines Science, Engineering, Technology and Maths.

“We used Google Earth to plan the town model and we also went on walks to the historical sites of the  town,” said Mr English.

On behalf of Scoil Mocheallog, he thanked the children’s parents for bringing in copious amounts of Lego.

“We are very thankful to Glenfield Engineering for sponsoring the casing for the model and to our caretaker Declan Freney for putting it together. There are now two models of Kilmallock in the town, the other located in the museum. We hope people from Kilmallock and surrounding areas enjoy the second one as much as they have enjoyed the first,” said Mr English.