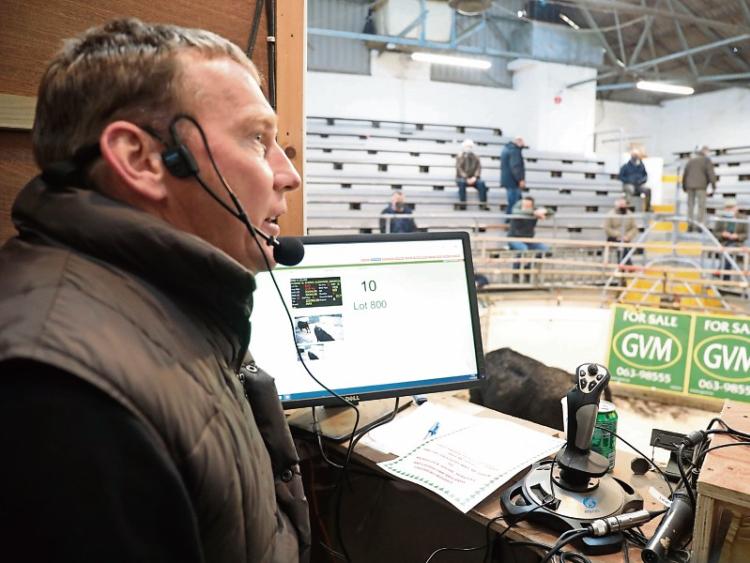 Dermot Lenihan watches bids on the screen and in the ring at Kilmallock Mart | Picture: James Treacy

What a year it has been!

I had heard mention of the coronavirus outbreak in China possibly in early January but like most other people it did not really register with me to any great extent.

As we moved from January into February, we began hearing more about the coronavirus and I began to get more WhatsApp messages about it – usually the funny ones.

However, in March, just as we were heading into our busy period, it hit with a bang. The national lockdown was announced, and only essential business could remain open. Thankfully, we were in that category. However, this did not mean that it was going to be business as usual.

We were informed that no live auctions could take place which was a little bit challenging given that we are a livestock auction mart. We were told that we should try and match sellers with buyers so thus commenced our ‘matchmaking phase’. It was a particularly challenging and scary time accompanied by the backdrop on TV of the very sad pictures appearing from Italy, Spain and other countries which were very badly affected at the time.

During this period, I remember coming into work and the roads were practically empty. I recall the sunny days and hearing about people watching their favourite movies at home on Netflix and learning to bake and cook. I remember saying to one of the guards who was waving me through a checkpoint yet again that I really would not mind if he sent me home for a week – only joking!

During this period of late March and into April, our livestock numbers dropped out of the sky – down 85%. We had to lay off most of our staff, but we continued to pay them. Thankfully, the Government stepped in with the employment subsidy scheme and this has been an enormous help. During this time, we tried everything to try and make our ‘matchmaking’ more efficient. For a couple of weeks, we tried a WhatsApp auction. Then in late April, we were introduced to live streaming of auctions from a company called LSL.

This was an entirely new concept for marts, and we wondered if it would work. We decided to give it a go and we were the third or fourth mart in the country to do so. It was a challenge and a worry because people would be buying cattle in many cases without seeing them in the flesh. The Department did allow a limited number of people to view cattle beforehand subject to restrictions. There was a lot of resistance early on, many prospective buyers did not even have smartphones but luckily, we had a few spare ones from our WhatsApp sales. I remember the first calf sale we conducted online, and I was genuinely worried if we would have any buyers at all. My worries evaporated after the first few minutes when bids came in from all over the country and with loads of new buyers.

The sale was a great success and I remember at around 4pm in the evening, I saw two vans coming into the mart with signage showing that they were kitchen fitters from the midlands. I knew that we had not ordered any new kitchen and I wondered what they were doing. What they were doing in fact was collecting 40 calves that they had bought online in the sale. This was in early May and since then the online streaming has been our saviour. Numbers started to pick up immediately, we began to get our staff back and when limited numbers of buyers were allowed into the rings in early June, numbers had recovered well, and everybody was a dab hand on the smartphones. We have been through different levels of restrictions since but the online is a constant. Even when buyers are allowed into the ring, there are still a lot of online purchases.

During the latest lockdown in November when no one was allowed into the ring, the online was our only option and trade and numbers held up reasonably well. In general, sellers are quite happy to drop their animals, go home and watch the sale on their phone out on the farm or in the kitchen. I cannot say that all buyers are 100% happy with it, we had a situation a couple of weeks ago when the picture went for a minute or two on the internet. When Denis Kirby went on the rostrum to fix it, the lads around the ring told him it was fine, that they did not need it!

We have also had a few occasions where buyers purchased stock online and when we called them, they said they never purchased. On one occasion, we were told the young child had been given the phone (probably to keep him quiet) and while on the phone managed to log into our sale and get himself a couple of lots – smart child! On another occasion, we were told the phone was to blame, it would not stop, it kept bidding and seemed to take on a life of its own. Apparently, some of these phones are not only too smart but also very devious!

However, without doubt, I believe the introduction of online streaming of sales has been one of the most significant advances in livestock marts in the last 50 years. It has opened the doors of the mart to a much wider audience, it has increased competition, and it gives sellers much greater flexibility. No longer will sellers have to complain about having to sit around the mart all day waiting for their stock to sell. We also hope that it might encourage younger farmers, some of whom might have deserted marts in the past to return and see the many benefits that marts can offer.

One other welcome benefit is that the reduced numbers of people in marts this year has led to a significant reduction in accidents. It is much easier to enforce health and safety in the yard if you have fewer people down there. I believe online streaming is here to stay but it works best in tandem with buyers also in the ring. We cannot stream our sales without internet. Broadband is woefully inadequate in some areas and must be addressed. Selling online has been a major new challenge for our auctioneers but they have thoroughly embraced the challenge and have led the online charge. When an online bid comes in, the screen in front of the auctioneer goes yellow. We now hear our auctioneers announcing a bid from the ‘yellow man’!

GVM is also involved in other business – property auctioneers and we have sizeable property investments in Ireland, Germany, and Poland. While it has been a challenging year for our tenants in those properties, we have worked with them and from our perspective, the return from those properties will still be reasonably satisfactory in the year.

We have also introduced our board members to virtual meetings. They can never be as efficient or good as an actual physical meeting, but they are a great alternative. It has been suggested that even when things get back to normal, the online forum is a great way to perhaps have a discussion or get a decision on some matter that might need urgent attention. I wonder what our founder members would think of all of this.

I want to mention our local Department of Agriculture. Every step of the way this year through each level of restriction, we had to have our protocols approved by the Department. They attend most sales to make sure that things are done properly and that everyone is kept safe. I want to thank the DVO Lorna Meaney and her team for their support.

I want to thank all our staff for their great contribution throughout the year. It has been a difficult and trying time for them, but they have performed brilliantly. They have manned our frontline and ensured that we could continue to operate.

I want to thank all our customers for their patience and understanding, they have had to cope with a lot of new ways to do business this year, but they have stuck with us through it.

In this most challenging of years, I am reminded of a quotation from Winston Churchill – ‘A pessimist sees the difficulty in every opportunity, an optimist sees the opportunity in every challenge’. I would like to think that we have tried to be optimists and let us all be optimistic for the year ahead. Hopefully, the vaccine is on the way soon and we can look forward to brighter days.

A number of our patrons and staff have suffered the loss of loved ones during the year and we think of them at this time.

Finally, I would like to wish everyone a happy, safe, and peaceful Christmas and a happy New Year.

*PJ Buckley is CEO of GVM