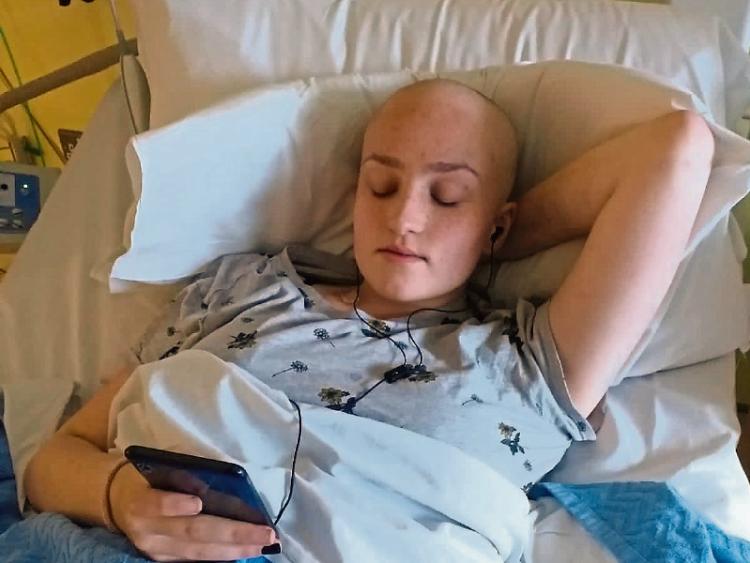 Brave: Lauren Blackwell’s attitude is, ‘Look, my hair will grow back, once I get the treatment and I get better’

A COUNTY Limerick teenager’s life was changed in a matter of minutes.

The 15-year-old fainted. That evening she was in University Hospital Limerick and the next day in Crumlin Children’s Hospital being treated for a rare type of leukemia. There was 75% leukemia in her system.

On the following Friday, Lauren went for surgery to have a Hickman line put in, a lumbar puncture, bone marrow taken and had chemo put into her spine.

Ever since October 19, the eldest grandchild of Ruth and Harry Blackwell - well known local boatman - has mainly been in the care of staff in UHL and Crumlin. Mum, Lorraine, has been with her every step of the way.

“I couldn't believe it when we got the diagnosis. I thought that there must be a mistake because when she fainted that morning and came out of school she was fine. She was smiling. Looking back, the only symptom she had was that she was inclined to be a bit pale. But how would you know? You wouldn't think because somebody is pale that they could have leukemia.

“I'd like credit to be given to my own doctor, Dr Suzanne Fitzgibbon in Askeaton. I rang her and she told me to bring her down straight away and that she'd do the bloods. She was brilliant. She got it done immediately. The lab rang then that the child was to be brought in immediately,” said Lorraine, who has two more daughters Tammy, aged 9, and Layla, 8.

Since then Lauren has been “inspirational”, said her mother.

“She had 11 days of treatment in Crumlin. We had her home for four days but she ended up back in UHL with high temperatures. She was very very sick and put in a high dependency unit. There was an infection in the line and it ended up that she had sepsis. We were then transferred in an ambulance to Crumlin. There was a doctor on board because she was so sick. She battled through temperatures and infections. She soldiered on,” said Lorraine.

They remain in Dublin but she hopes to have Lauren home for a few days over Christmas. The fifth year student “celebrated” her 16th birthday in Crumlin.

“She turned 16 on November 25 and we were here due to infections but Crumlin were brilliant to her. They gave her presents, they had a party for her, cake, you couldn’t have asked for a better day in the circumstances. They are absolutely brilliant up here.

“She's in good form, in fairness. She has lost her hair and she had a most beautiful head of hair. She says, 'Look, my hair will grow back, once I get the treatment and I get better’. She kept me going to be honest. She is so strong. She just gets on with it," said Lorraine.

Due to Covid, Lorraine is the only one who can be with Lauren in Dublin. Her partner Gerard O'Dwyer is looking after Tammy and Layla with the help of Lorraine’s family.

“My family, friends and neighbours have been so supportive. Askeaton NS have been so kind to Tammy and Layla. Teachers, Leeanne Moloney, Mary Gaffney, Layla's SNA, and principals, Aine O'Connor and Brendan Hayes have been brilliant. Mary has gone above and beyond. They are just so good to the girls. I know they are so well looked after,” said Lorraine.

While Lauren's friends in Colaiste Mhuire have been inundating them with messages and cards signed by students and teachers.

Lauren's story has also inspired the school to fundraise for Ronald McDonald House, which provides accommodation for 20 families every night while their children are hospitalised in Crumlin. The school is hosting a #WearYourSTRIPES campaign this week including a Christmas jumper competition on Friday. Click here to donate.

Lorraine said what happened her daughter is every parent’s “worst nightmare” but her prognosis is positive.

“Everything looks good and they are confident that the chemo alone will treat it but if the child hadn't fainted we were in serious trouble because the type of leukemia she has progresses very fast,” said Lorraine, who is looking forward to a quiet family Christmas at home in Askeaton.