Hold the front page! Pupils at Limerick school are not writing off newspapers just yet 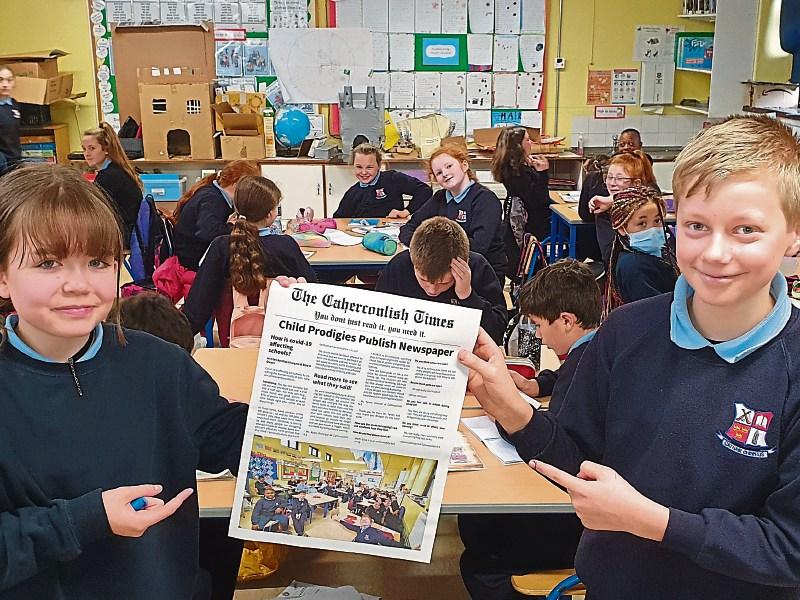 Hold the front page: Nadia Snopek and Nathan Orlik and their classmates wrote and produced the Caherconlish Times

If you want a job done “write” then do it yourself is the mantra of Caherconlish National School pupils.

Many think young people have no interest in newspapers but this is open to correction. The Limerick Leader has some competition with the Caherconlish Times hitting newsagents’ shelves in recent weeks.

David Tynan, teacher, said the project was completely child led in its approach.

“It ended up snowballing into something that was a product of the children's own initiative and hard work. I don't know when the idea to print numerous copies of the paper came about but it's just something that when it was mentioned, we all thought ‘Yes, why not?’” said David.

Mr Tynan used Dorothy Heathcote's 'Mantle of the Expert' during English writing lessons with 5th and 6th class to do the project entirely through drama.

This is where the teacher (the expert) exposes the children to a working environment where they are treated and expected to work as employees of a company. In this case, a news outlet. The teacher assumes the character of the boss.

The children responded brilliantly to this, were excited to mass produce copies of their articles and to share their writing with the town of Caherconlish.

“The children themselves became reporters and conducted interviews with other students, teachers, staff members and residents of Caherconlish. They wrote articles ranging from the effect of Covid-19 on schools, to sports, current affairs, crime, the psychological impact of social media on young people and local news.

“The children took charge of the project and started producing some thought provoking writing. I edited the articles down and put the project together using an online software called ARTHR. We decided to print 50 copies as we didn't know if there would be a demand for the paper. The reaction from people was excellent as the copies sold out in less than two days,” said Mr Tynan.

Even priced at €5, Keith Ryans XL shop and Centra were on looking for more copies.

Principal, Pa Ryan praised 5th and 6th pupils for their creative piece of work and “how they integrated various aspects of current affairs and curricular subjects into this newspaper.”

“We are a digital school encouraging children to become 'digital learners' and it is fantastic to see children researching information and publishing their very own newspaper through the use of ICT,” said Mr Ryan.

Teacher, Carole Cleary said there is no doubt the future is looking very bright for these aspiring journalists in 5th and 6th class!

Thankfully from the Limerick Leader’s point of view there has been just one edition of the Caherconlish Times printed so far!

And the school has its own proud story to share. Last March just before Covid stopped the world in its tracks, their camogie team was crowned champions of the Allianz East Limerick Cumann na mBunscol indoor camogie competition in the Millennium Centre.

It was only last week that the team were presented with their medals.