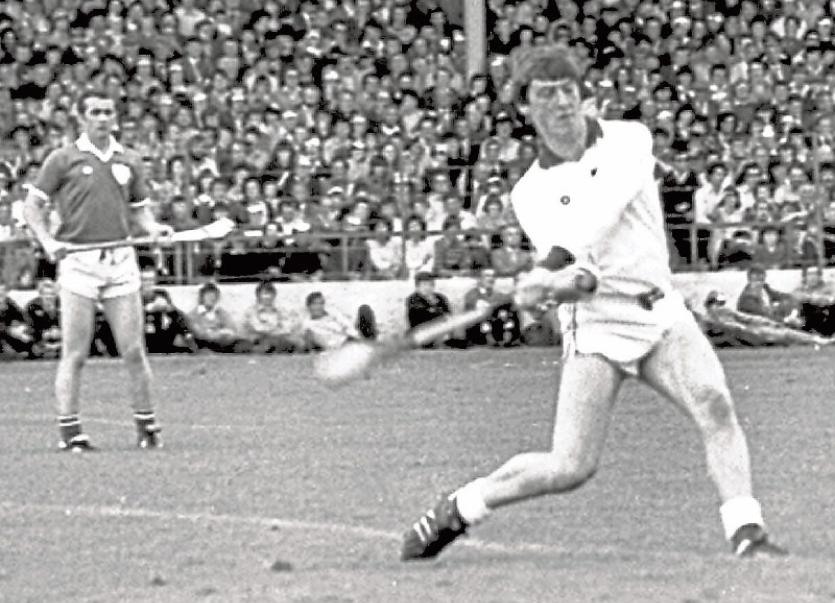 Like father, like son: Tommy Quaid gives a mighty clearance during the Munster Final against Clare in 1981

The old saying that history repeats itself is certainly true for two families in the Limerick senior hurling panel for this Sunday's All-Ireland final.

Casting our mind back forty years to 1980, Tommy Quaid, and John Flanagan, from the Feohanagh club in West Limerick were on the team that lost to Galway by 2-15 to 3-9 after a lively and entertaining encounter.

Tommy lined out in goals and Johnny was centre forward. Both players gave great service to their county, but All-Ireland success eluded them.

Two years ago their sons Nickie, and Seamus, avenged that Galway defeat to bring All-Ireland honours to their families, clubs, and county. Last Sunday week both were on the Limerick team that defeated Galway by 0-27 to 0-24 in the semi final to progress to another decider. Nickie son of the late Tommy plays his club hurling with Effin, where Tommy and family relocated to and played with in the later stage of his career. He lined out in goals, and Seamus son of Johnny lined out at full forward. I recall both Tommy's and Johnny's career up to that 1980 All Ireland final played on Sunday September 7, from newspaper research of that time.

Johnny Flanagan was born on January 9, 1956, and grew up on the family farm in Rathpalantine, (the fort of the Palatines) and he received his early education in Broadford N.S. He graduated to Newcastle West Vocational School, winning county U-16 hurling honours. Next he attended Copsewood Agricultural College Pallaskenry where he won a Duggan Cup City senior hurling trophy. With his home club Feohanagh he won west U-14 hurling honours, and a West runner up medal with Castlemahon in juvenile football.

His first appearance in the county colours was in 1973 when he was picked for the minor hurling team. Tipperary defeated Limerick in the Munster final and Johnny was corner forward. He also played U-21 hurling with the county going under to Cork in the Munster final. Johnny joined the Limerick senior hurling panel in January 1980, after impressing in the West Junior hurling championship the previous year. In his debut match he lined out at corner forward against Galway, in a tournament match at Athenry.

It was a meteoric ascent to the higher grade, and after a few more tournaments, and National League matches adopted well to the step up from junior to senior level. The big gap was the speed of inter county hurling as against the slower pace of junior club hurling. County training was two nights a week, and three nights from the start of the championship. He also trained with the club and on his own at home with his brothers to reach that standard.

His club mate Tommy Quaid an experienced county player was a great support to Johnny when he joined the county panel. He gave him invaluable advice and encouragement to help him settle into the demands of county hurling. His favourite position was right corner forward and he had mighty battles over the years with Noel O'Dwyer of Tipperary and Johnny Crowley of Cork. He had an unorthodox grip swinging the Hurley with his left hand on top. He liked a Hurley with a light handle and a heavy boss, and JJ O'Brien from Cahir, supplied them.

Johnny was a bachelor aged 24 years, and the only farmer on the team for the 1980 All Ireland final. He lined out at centre forward and the Fitzmaurice brothers Fr Willie, and Fr Paudie, from Killeedy completed an all West Limerick half forward line.

Tommy Quaid was born on the23 of April 1957, and educated at Feohanagh N.S. Newcastle West Vocational School and Limerick Regional Technical College, winning an All Ireland Vocational School's trophy. He won a West U-14 Hurling medal with his club, for whom he later figured in senior hurling and junior football. Tommy gave two years service with Limerick minors, (1974, 1975, and four years with the U-21 team. He first lined out for the senior team in the 1975/76 National Hurling League quarter final against Kilkenny.

He was a reserve on the 1979 Munster Railway Cup side, that lost to Connacht and lined out with Ireland in the Shinty International against Scotland the same year. It was something of an accident that Tommy started to play in goal. When the Quaid family used to play as youngsters at home, because he was very small, he was often shoved into goals out of harm's way more or less. In time he grew into the position and really enjoyed it.

During his early days with the senior team, he received a lot of advice from the great Pat Hartigan, who played in front of him at full back. If Tommy made a mistake Pat would encourage him rather than give out, which was great for his confidence. When you play in goals it is all about concentration and being alert when called into action.

His other sporting interests are badminton, football, and all outdoor sports. He trains collectively with the county team and at home with his family on their own field. His three brothers Seamus, John, and Pat play club hurling and his sister Noreen plays camogie. Tommy works as a fitter for Golden Vale Charleville and plays outfield for them in inter-firm competition. In addition, with his brother Seamus manager, opened a sports shop in Maiden Street Newcastle West. They supplied the team kits for the Limerick squad for the All-Ireland final. By now Tommy was aged 23 and he had grown to 5 - 10 in height, and 12 stone weight.

Now 40 years later Galway have been beaten and Waterford stand in the way of another All-Ireland success. It would be a great way to end 2020 and banish talk of the virus in the run up to Christmas. Go Limerick go.