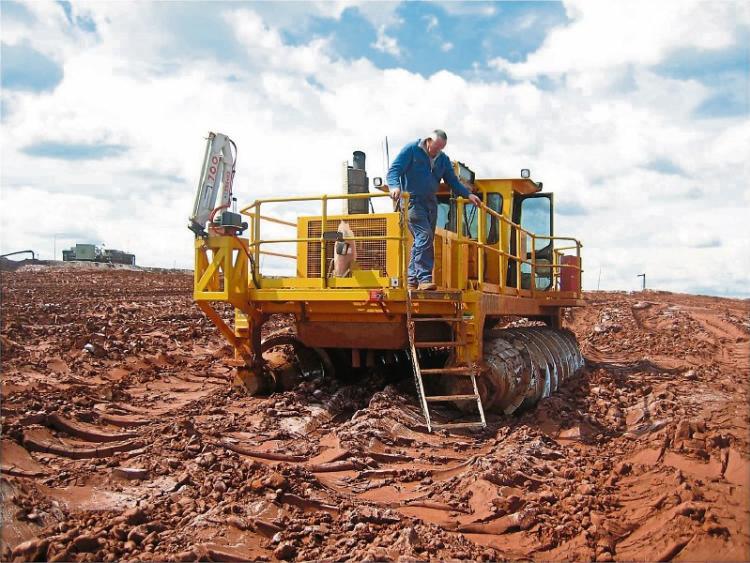 IRISH Cement’s communications boss has refused to rule out the possibility of the company using so-called ‘red mud’ at its Limerick plant.

On the third day of an Environmental Protection Agency (EPA) oral hearing into the company’s €10m plans to phase out fossil fuels in favour of solid recovered waste, used tyres and other alternative sources, Brian Gilmore was pressed by a number of contributors on the potential for the use of the bauxite residue in Mungret.

Having secured planning permission for the physical elements of its project from An Bord Pleanala, an EPA licence is all Irish Cement requires to bring forward its plans. But following a groundswell of opposition in the community, this oral hearing is taking place to allow the regulator to form a decision on whether licence permission should be granted.

Red mud is an industrial waste generated during the refinement of bauxite into alumina, with lands around the Rusal factory in Aughinish carpeted with the solution.

Local councillor Daniel Butler told the hearing there is “huge anxiety” in the community that the red mud could be used, as it’s known to be environmentally hazardous.

During the session, held online this Friday, former mayor Jim Long initially raised the issue, and was assured by Mr Gilmore that it’s not in the firm’s plans.

“We are using imported bauxite ore which we will bring into the country as a product to make cement. We have no current desire or need to acquire the red mud or material you mention,” he said, having earlier confirmed around 2% of its input would come from bauxite ore.

However, in a follow up question from local resident Joe Benson, the communications director was again pushed to rule out the use of the residue in future.

In response, he said: “We don’t take it at the moment, and it really is a matter for the EPA in assessing the licence as to whether they would consider if it needs to be in our licence in the future. It’s something we can’t rule out at this moment in time.”

Cllr Butler said: “This is something we really need to focus on here. The EPA needs to focus on in terms of robustly assessing the requirement or the need to grant a licence allowing Irish Cement to burn that red mud. It’s clear from the response by Irish Cement that they will not rule it out, which suggests to me there is a clear intension at some point in the future, to burn mud in the kilns here.”

In response to questions from the chairman of the hearing Patrick Byrne, Mr Gilmore said should the licence be granted, Irish Cement would be using solid recovered fuel, meat and bonemeal and tyres primarily – in that order, and based on product availability.

Irish Cement has been given permission to store 60 different product codes by planners – a number reduced from over 100 on appeal to An Bord Pleanala. But Irish Cement cannot test the impact of any of these until it gets a full licence from the EPA, Mr Gilmore told the hearing.

This was raised as a concern by Cllr James Collins, who said: “My suggestion is we don’t know the effects of incinerating these codes. Most certainly we don’t understand what is contained in some of the waste codes. There is no testing on the combination of these wastes. How do we know how some of them will react to each other if they are put into the cement kiln as a combination?”

Something else Mr Gilmore failed to rule out was whether Irish Cement would seek permission in future to expand its production capabilities at its factory on the edge of Limerick.

Irish Cement is seeking a licence to process 90,000 tonnes of alternative fuels per annum, but Cllr Collins noted that at its sister site in Platin, Co Meath, it secured permission for 120,000 tonnes each year.

“The cement plant in Limerick is a smaller capacity factory so the 90,000 tonnes permission will take us many years to achieve. It’s not possible to predict beyond that. It could take us 10 or 20 years to get up to 90,000. You can’t rule it out. As a business, we need to keep that opportunity available to us, should the need arise,” Mr Gilmore said.

Elsewhere today, Fianna Fail’s Clare TD Cathal Crowe accused Limerick City and County Council of showing “very little neighbourly spirit” to the Banner county, after giving planning permission to Irish Cement to allow it to construct the facilities it would use to store the alternative fuels.

He pointed out that Clare County Council – which up until February he was a member of – took the “unprecedented” step of objecting to Limerick Council’s permission.

The TD also accused them of “a betrayal of the people of Limerick.”

In a separate development, it was claimed a report from State health watchdog Hiqa, which suggested there is no link between the high rate of respiratory deaths in Limerick and the Irish Cement plan is based on “out of date” statistical data.

After the study was referenced on a number of occasions by representatives of Irish Cement, Dr Ioannis Zabetakis of the University of Limerick’s health research institute pointed out the statistics in the report relate to the period 2011 to 2016.

“The validity of this report is very minimal,” he told the hearing.

Today’s session of the oral hearing also heard from a number of other local representatives, including City West councillor Elisa O’Donovan.

She said her constituents contact her almost on a daily basis about Irish Cement’s proposals.

“And what they are telling me is they are afraid of what will happen if the EPA grant this licence to Irish Cement. We know the air quality will deteriorate of this licence is granted,” she said.

There was also criticism of the EPA from many groups, including Green Party councillor Sasa Novak, who described it as a “light touch regulator”.

Cllr Butler added: “I think it’s clear this site is not well maintained, or operated, given its condition and numerous dust emissions. The plant was designed around old technology, old materials and processes and that surely would not be acceptable today given advances [in technology]. So why are you accepting them?”

Mary Hammill, who is one of the founding members of Limerick Against Pollution – the main opposition group to Irish Cement’s proposals – fought back tears during her contribution to the hearing.

“The cost of fighting this battle has been great, it has left little time for anything else. We should not have been put through this when all we want is to continue with our lives in a healthy and safe way,” she said, “To date, there has not been one shred of evidence provided proving this proposal is safe.”

For its part, Irish Cement has long maintained its reforms will not lead to an increase in emissions into the local environment.

The oral hearing continues on Monday morning when, among others, counsel for Sue-Ann Foley, JP McManus’s daughter will speak.