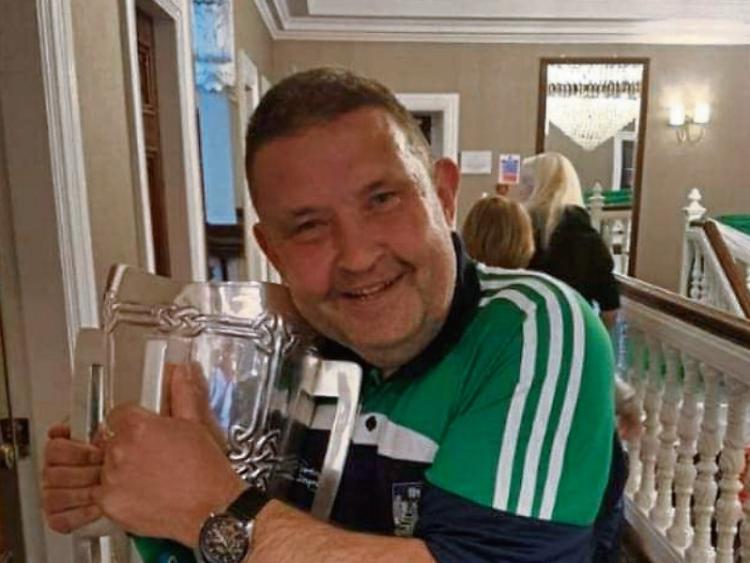 WHEN the final whistle blew on Sunday and Limerick were into another All-Ireland final many people’s thoughts turned to the late Bill Bourke from Pallasgreen.

The one picture which stood out was him holding the Liam MacCarthy Cup in the City West Hotel the morning after the 2018 All-Ireland hurling final. It meant so much to him, he was arguably one of Limerick’s most ardent supporters. Bill followed the team the length and breadth of the country. It’s certain that all the journeys with Bill were short - the craic, conversation and his opinion would always be humorous and straight. He called a spade a spade. Match days be it Limerick or Pallas were always special, the excitement and with the rubbing of his hands - faster than Katie Taylor’s punches - you knew he was in his element.

It was the famous mountaineer Edmund Hillary who said: “While on top of Everest, I look across the valley towards the great peak Makalu and mentally worked out a route about how it could be climbed. It showed me that even though I was standing on top of the world, it wasn’t the end of  everything. I was still looking beyond to other interesting challenges”.

The late Bill had another challenge with a serious illness on Monday, November 9 at his home. But this mountain was to prove too steep and he succumbed to his illness and passed away in University Hospital Cork on Sunday, November 15. On hearing of his illness, all week prayers, encouragement and tributes poured in all wanting him to pull through. The social media was alive with pictures and videos which showed the esteem in which Bill was held.

The Pallasgreen club was very dear to his heart, as a supporter he wasn’t afraid to subscribe to the action from the sideline, his words of encouragement and sometimes not too encouraging would vibrate all over the ground. He served as an officer of the club as PRO in 2004. His other sporting passion was Liverpool FC, a team he supported as a young boy, the banter with other club supporters would be witty and knee-slapping. To see Limerick and Liverpool win their respective All-Ireland and Premiership titles recently after a lapse of so many years were moments he cherished.

He was an amazing man who packed so much into his short life. It was ironic that he was raised on a hill at Bunavie, a quarter of a mile up Nicker hill with his parents Donal and Esther, brother Martin and sister Siobhan.

The house had a spectacular view looking across to the hills of Doon. Most probably, Bill’s love of mountain and hill climbing was honed here as he had travelled all over the world climbing some of the most prestigious and notable peaks, he also included in his bucket list, the well known and celebrated Camino Walk.

After a number of years in Bunavie his family moved to Garranemore near the village of Pallasgreen and this is where Bill got involved in many aspects of the community.

Move on a number of years and Bill became more independent, working and built his own house in Ballyhurst. You’d often wonder why he built a house, because he was rarely living in it, he had so many friends, he resided more in their homes than his own, everyone treated him like a member of their family.

A talented individual, he starred in so many plays and the character he played would always stand out. His stage presence included roles in Man of La Mancha, Big Maggie, The Little Prince and The Kings of Kilburn High Road. In all these plays there was a lot of laughter especially during rehearsals where Bill was the caricaturist.

But one role stood out for him and that was  in the world acclaimed Passion 2014 directed by his good friend Eamonn Harty, His character of Peter, whom he spent months studying for and grew the trademark beard, was precious. This event was powerful and very emotional for the huge audience and for the actors it was expressive, strong and traumatic. Bill’s acting skills in the Garden of Gethsemane and also at the Church when he denied Jesus three times will be forever remembered. That occasion on Easter weekend 2014, which was later broadcast on national TV and made world headlines as the first 24 hour re-enactment of the Passion, was another accomplishment by Bill. He was a great supporter of other dramas and especially St Patrick’s Players of Cloverfield.

His brother Martin emigrated to the USA some thirty years ago and Bill was now big brother to his sister Siobhan. Siobhan had similar traits to Bill, she was engaging, full of humour and friendly. But Bill had two heartfelt experiences with Siobhan, firstly when he walked her down the aisle on her wedding day to Kevin and sadly last year when she passed away following a short illness. Bill can now shepherd her in their home of immortality.

During that year Bill reached the milestone of fifty years, he contemplated not having a celebration but his many friends persuaded him and organised the night in the Red Deer. If everyone that was invited turned up, it would resemble New Year’s Eve on Trafalgar Square.

No matter where you see Bill, you can be sure that place is a happy place. His laughter and presence is infectious and would draw you in. He was a larger than life character. One occasion he looked forward to every year was a 45 card game in Dromalty, the home of Pat and Nano McMahon, friends he has known for a long number of years. He was an astute card player and took great pleasure winning tricks, with his loud laughter and the rubbing of his hands, he’d be buzzing with excitement. He was the centre of attention, the entertainer, but mostly the one to beat with his partner.

But if anything Bill had the presence to light up any room, he was good humoured and endearing and that’s why he had a university of  friends. Everyone was his friend; he had no enemies. Knowing him has added many qualities to our own lives. The community and beyond is all the poorer now for his passing. When he climbs that final mountain and meets Peter, he will say, “Bill you deserve this Oscar as a lifetime achievement award for the smiles and laughter you brought to so many people”.

An amazing person and a ray of sunshine, no mountain was high enough. Bill Bourke, legend, You’ll Never Walk Alone. Sympathies to his brother Martin, brother in law Kevin, relatives and his wide circle of friends.