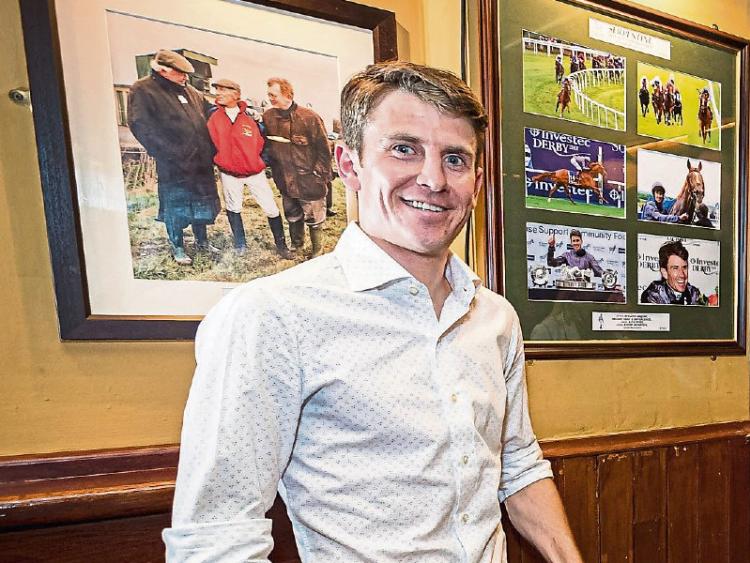 LIMERICK jockey Emmet McNamara who scored a famous win in one of the world’s most prestigious races, the Epsom Derby, has been named the Limerick Person of the Month.

Thirty year-old Emmet who is the  son of Rathkeale-based trainer Eric and Paula McNamara, scored a thrilling front running Classic success on the Aidan O'Brien-trained Serpentine in July.

The £500,000 Investec Derby is the most valuable race in Britain and the most prestigious of flat racing's five Classics.

“I am surprised and shocked considering the achievements of people in Limerick this year. It’s a nice surprise though,” said Emmet when he was phoned by the Limerick Leader this week to tell him of the Limerick Person of the Month award.

While it’s now nearly five months since the Limerick man piloted Aidan O’Brien’s 25-1 shot to an historic victory, Emmet is still pinching himself at what he has achieved.

“You never think you are going to win a race like that in your wildest dreams,” he smiled. “I was hopeful more so than confident.  Aidan was quite hopeful as well which gave me a certain amount of confidence. I knew I was in with a fighting chance. I was riding a horse that was unexposed and had plenty of potential for improvement.”

Born and raised in Rathkeale, Emmet attended primary and secondary school in Askeaton.

His father Eric is an accomplished trainer in Rathkeale and growing up the young Emmet was surrounded by horses.

“I started riding ponies properly when I was around eight years of age and I started pony racing from the age of 11,” Emmet explained.

And as soon as he rode his first pony racing winner Emmet had it in his head that he wanted to become a jockey.

“I was working towards that then all the way through. I finished my schooling at 17 and I got an apprentice licence then. I was an apprentice to Ger Lyons in Glenburnie Stables, Kiltale, County Meath.”

Emmet was champion apprentice with Ger Lyons at the age of 18.

“I had a lucky enough time for Ger,” he asserts.

From there he went to Ralph Beckett in England for a short stint around 2010 before coming back to Ireland.

“I rode a little over jumps when I came back, for about a year and a half, before concentrating on the flat again. I started in Aidan O’Brien’s around six and a half years ago at this stage, in Ballydoyle, and am based there since.”

Of the man who has the Midas touch when it comes to flat-racing, Emmet said: “He is a fantastically successful man personally and there is a rich history in Ballydoyle because Vincent O’Brien trained here before Aidan as well. It’s a great team to be a part of and obviously I have been lucky for them as well. I’ve had a great six and a half years here. I'm surrounded by lots of  good people and I’ve been successful enough.”

While Covid has curtailed sporting action across the globe, Emmet is still very fortunate to be able to do what he loves, albeit in a much different environment.

“We are an essential service I suppose because we have to keep the horses fed and keep them exercised and keep everything going so maybe not as much has changed for me as it has for everyone else. We take all the precautions we can in work with social distancing and we've put in extra toilet and handwashing facilities and we wear masks to ride out so everything that can be done is being done. And from the racing point of view we had a small shut down in February/March but we were lucky enough to get back racing behind closed doors. It was a little bit eerie at the start with no crowds but it’s something we’ve all gotten used to and I think we are all just grateful to be racing really. Of course it would be fantastic to have the crowds and the owners there but just to be racing at all is fantastic.

“I’m one of the lucky ones - I get to have my hobby as my career. I've been riding 13 years now so it’s been a good career.”

Back home in Limerick, parents Eric and Paula are chuffed with Emmet’s achievements, as are his siblings Conor, Kate and Erica.

Conor race rides over jumps while Kate, Erica and Paula also have a huge interest in the racing game. As does dad Eric, of course!

“Dad especially got a huge kick out of it,” said Emmet of the Epsom win.

“He has been in racing for a large part of his life ever since I was born or just before it so he knows what it means to win a race like that.”

The one race Emmet would love to win of course is the  Prix de l'Arc de Triomphe.

“No more than the Derby, it is a dream that you don’t expect to come to reality but if the Derby can happen you never really know. I think apart  from the Derby the  Prix de l'Arc is the one every jockey in Europe would love to win.

“I’ve been lucky to ride some nice winners after the Derby so onwards and upwards and hopefully things will continue in that vein.”