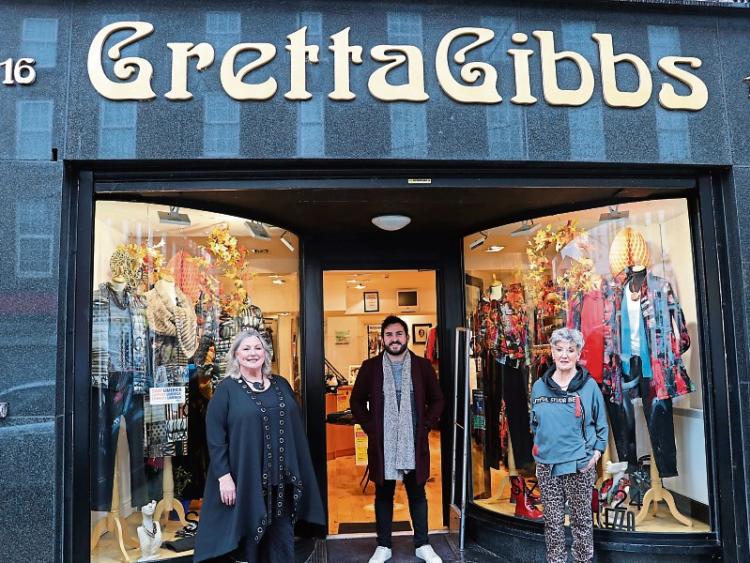 The late Gretta Coughlan Fitzgerald opened the boutique alongside her sister Lillian Coughlan Gibbs on Bedford Row on November 29, 1985. Their sister Veronica Coughlan Benn joined the duo shortly after.

Gretta Gibbs moved to Catherine Street in 2006 where it has remained ever since.

Sadly, Gretta tragically passed away in 2014 after suffering a fall.

Her son Paul Fitzgerald is the marketing manager of the boutique and is incredibly proud of the business his mother and aunts built up.

“Gretta Gibbs always brought a range of fashion from all over the world. My mam and aunts would travel to Paris, London and Milan to find high-end fashion. We have brands that you probably won’t find in any boutique across the country as they are so rare and select,” Paul said.

One of the major reasons as to why Gretta Gibbs is so successful is the range of sizes they offer. Their sizes range from size eight to size 24.

“Women may come into the shop and not know what colours suit them for example. When you come into Gretta Gibbs you are treated like a MVP (Most Valuable Person) and Lillian and Veronica are experts at what they do.

“Returning customers are key for Gretta Gibbs. We’ve customers that have come in countless times over the past 35 years and without them we wouldn’t be where we are today,” Paul added.

Like many businesses across Limerick and the country, Gretta Gibbs had to close their doors in March due to Covid-19.

“Like many other businesses we had to close in March. Gretta Gibbs thrives on customer service, that was the main thing that my mother ingrained in the shop. She wanted every woman that walked into the shop to feel like a MVP.

“We have been selling clothes through social media and phone calls,” Paul explained.

“Veronica would come into the shop, pick up the clothes, bring them home and put them into the Gretta Gibbs’ bags and ship them off to customers.” Paul said.

Paul recognises that fashion is all online nowadays but he doesn’t want to drift away from his mother’s vision.

“The way fashion is moving now, it’s all online, but that isn't the Gretta Gibbs way,” he said.

“She was a true Limerick lady and is my main influence in life. It’s been a wild six years but she’s still very much alive in my eyes and the shop.

“The girls kept it going, which was very tough for them at the time and we’re so thankful for the support our customers have shown.

“Without the great support of the Limerick people, small businesses like ours won’t survive,” Paul concluded.