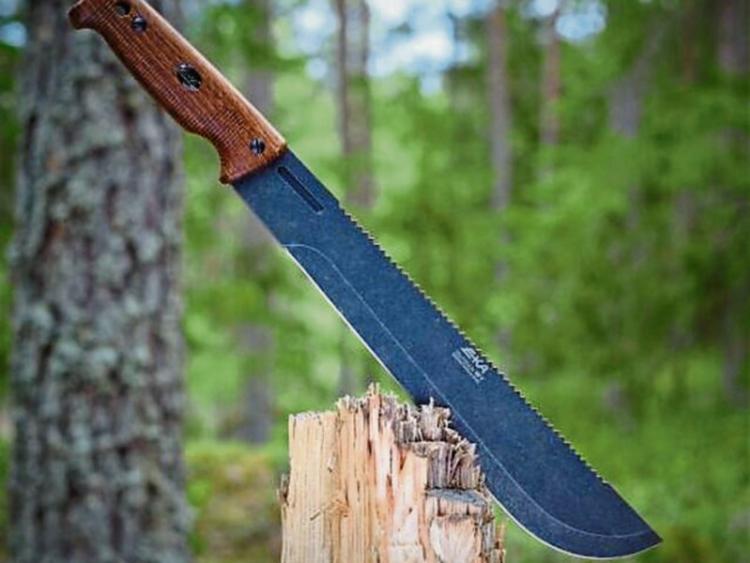 GARDAI received an anonymous phone call at 3am that a male was seen on Bruff’s Main Street with a large knife, Kilmallock Court heard.

Sergeant Tadgh Reeves, who was on duty in Bruff station, said he went to the scene and observed a male – Robert Coll, aged 32, of Green Cottage Place, Bruff.

The defence said Mr Coll has been using it earlier in the day to cut briars.

Judge Marian O’Leary asked could she see the machete. In handing over the bagged evidence, Sgt Reeves said to “be careful”.

The Bruff sergeant said he spoke to Mr Coll.

“He said he had a row with girlfriend. I arrested him under Section 15 of the Firearms and Offensive Weapons Act. He was co-operative after arrest. He did admit to having consumed alcohol and cocaine,” said Sgt Reeves.

Kevin Power, solicitor for Mr Coll, said his client pleased guilty to possession of the knife on September 8, 2019.

Mr Power asked Sgt Reeves if Bruff was quiet at 3am.

“Yes. There were a number of people around but he didn’t appear to be in contact with anyone,” said Sgt Reeves.

Mr Power said that his client had been using the machete to cut briars in his mother’s garden earlier that day.

Sgt Reeves said it is a device that could be used for that but there was “no reason for him to have it on the Main Street of Bruff at 3am”.

Mr Power said Mr Coll was working all day at his mother’s garden.

“There was a festival on in Bruff. He went out at 7/8pm, consumed a lot of alcohol and ingested cocaine. When he went home he had a row with his girlfriend. They are still partners. He left the house. He was not threatening his girlfriend,” said Mr Power.

Mr Power said the machete was “very obvious” but that he “did not use it”. “He is a qualified fitter / welder. He appreciated he had a problem with alcohol and cocaine and hasn’t taken it since shortly after the incident. They recently had a child.

“He apologises to Sgt Reeves, gardai and the court. He shouldn’t have taken it out of the house,” said Mr Power.

Judge O’Leary handed down a three month sentence suspended for two years. She made an order for the destruction of the machete.