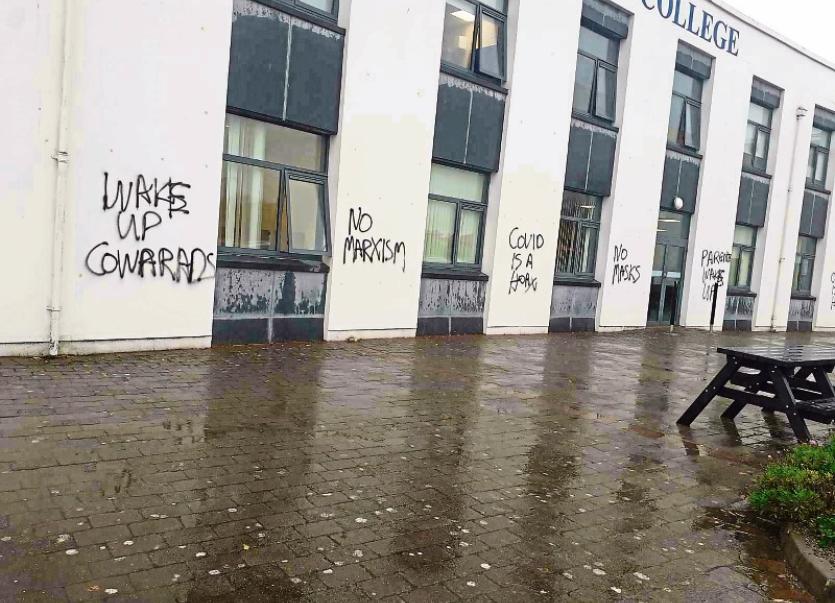 The graffiti on Castletroy College this morning

THERE has been severe criticism after a serious incident of vandalism which saw a Limerick school daubed with anti-mask graffiti.

Gardai have attended Castletroy College and are carrying out an examination after the exterior walls of the premises were targetted by messages which appear to carry theories around the legitimacy of the Covid-19 pandemic.

Numerous walls at the front of the school have been spray painted with the words 'Covid is a hoax'.

He said: “It’s silly stuff, it’s juvenile stuff and it appears to have been encouraged by these anti-mask and anti Covid-19 type protesters. We see protesters in the city each Saturday. It only takes one person to be influenced by this – and the likelihood is it is just one person carried out this at Castletroy College. It’s demoralising to people who are taking the message seriously. It’s a waste of garda resources.”

“There is an anti-establishment message there, but it’s a pity to see public buildings and school buildings defaced as a result of it,” said the Fine Gael man.

Metropolitan leader Sarah Kiely reflected the concern, saying: “Every member in this chamber would also condemn it.”

Local TD Kieran O'Donnell, whose children went to the school, said: "Like everyone else, I was appalled at what was done in terms of graffiti at Castletroy College. I've visited the school, met with the principal. I think there is an element of shock such a thing would happen. More particularly when we have people being  severely restricted and come through these difficult Covid-19 times and we see an increase of people going into hospital, this is grossly irresponsible. The perpetrator must be brought to account and the message must be this will not be tolerated. Covid-19 is a serious virus, people have died from it,  and it's something we want to continue to reduce the rate of."

He praised the community for offering to volunteer their time to clean up.

The Limerick Leader has contacted both the school and An Garda Siochana for comment.