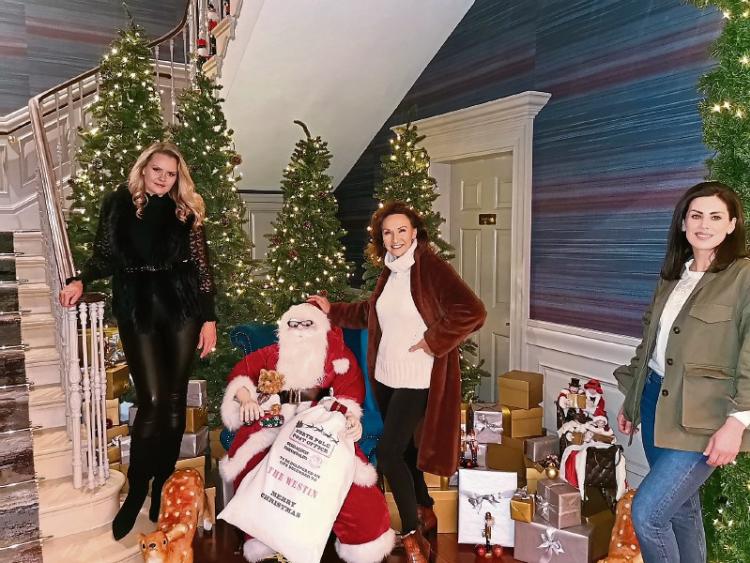 Asta, Lorraine and I managed to get a special photo with Santa Claus during a recent photoshoot in The Westin in Dublin

IN recent weeks I was thrilled to make the trip to Dublin to film with Oxendales for RTÉ at the Westin hotel. I had never been in this hotel before and we had the place to ourselves. It is a fantastic hotel!

It stands proudly next door to Trinity College and has a special area known as ‘The Atrium’ which is the epicentre of the hotel where we filmed some loungewear looks for Oxendales. It felt so festive there as the foyer was decorated beautifully. We took the opportunity to take a socially distant photo with Santy.

I had the chance to go back to RTÉ last week to talk about winter coats in terms of what’s on trend, shapes and the importance of colour. Some of the coats were absolutely fabulous and were from Ela Maria’s in Newcastle West. If you missed out, take a look at the RTÉ player.

I was delighted with the spread Ger and I got on RSVP magazine’s November issue. It was so fantastic to be able to do this shoot in the incredible Adare Manor.

It really tied in well with the outfits from local boutiques. It’s not easy to get Ger Lee into a photograph but he’s making an effort these days as my 70th is approaching.

Chat to you all next week, stay safe, Celia x