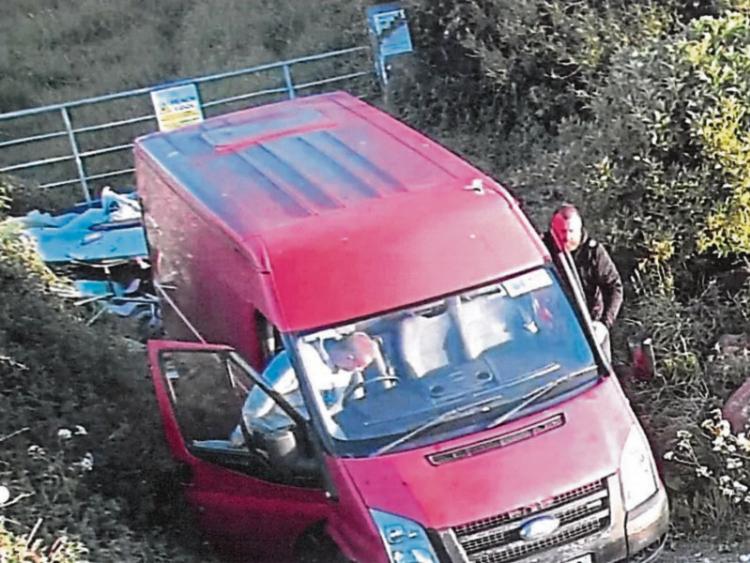 A still from the CCTV which was played in court

BENCH warrants have been issued for the arrest of two cousins who are facing the prospect of being jailed after they were convicted of illegal dumping.

After convicting Daniel and Patrick McNamara of several offences under the Waste Management Act, Judge Mary Cashin said they had polluted the countryside by their actions and that their behaviour was outrageous and cannot be tolerated.

She indicated she is considering imposing fines and a three month prison sentence in each case.

Both defendants, who are aged in their 40s and who have an address at Well Field, Garryowen, Limerick were before Limerick District Court in relation to an incident at Bushy Island, Drombanna on May 11, last.

Environmental Inspector Paul Clancy said the defendants had dumped “a large quantity of waste” on the side of a narrow rural road at 6.30am.

He said there had been a number of similar incidents during the preceding weeks and that the local authority had retained a contractor to install CCTV cameras.

Footage, played to the court, shows the defendants arriving in a red Ford Transit Van and removing the rubbish and dumping at the entrance to a field.

Daniel McNamara was the driver and registered owner of the van while Patrick McNamara was a front seat passenger.

Mr Clancy told the court he knows both men and that he was able to identify them as the culprits from the footage.

The local authority removed the rubbish and cleared the area at a cost of €767.

Patrick McNamara was also before the court in relation to an incident at Garryglass Avenue, Ballinacurra Weston on October 17, 2019.

Mr Clancy told solicitor Will Leahy that he observed the defendant “bringing bucket loads of rubbish from a house and loading it onto the back of a truck”.

He said Mr McNamara did not have a waste collection permit and was not authorised to transport the rubbish.

In a further prosecution, Daniel McNamara was convicted in relation to an incident at Raheen Business Park in the early hours of April 3, 2020.

On that date, emergency services responded to a rubbish fire in the car park outside a business premises shortly before 7am.

Mr Clancy said CCTV was obtained and that it was established a van had arrived in the area and that the occupants had emptied the rubbish from the vehicle and set it alight.

Gardai subsequently identified Daniel McNamara as the driver and a woman who was connected to the partially-rubbish told the court she had paid ‘a Daniel McNamara’ €500 to remove rubbish from her late father’s home.

“I found him on Facebook, I don’t know him,” she told Mr Leahy.

Having considered all matters, Judge Cashin said she was satisfied there had been a spree of offending and that the defendants were “in the business of disposing of waste illegally”.

Sentencing was adjourned pending the execution of the bench warrants.

The judge has indicated she is considering prison sentences.