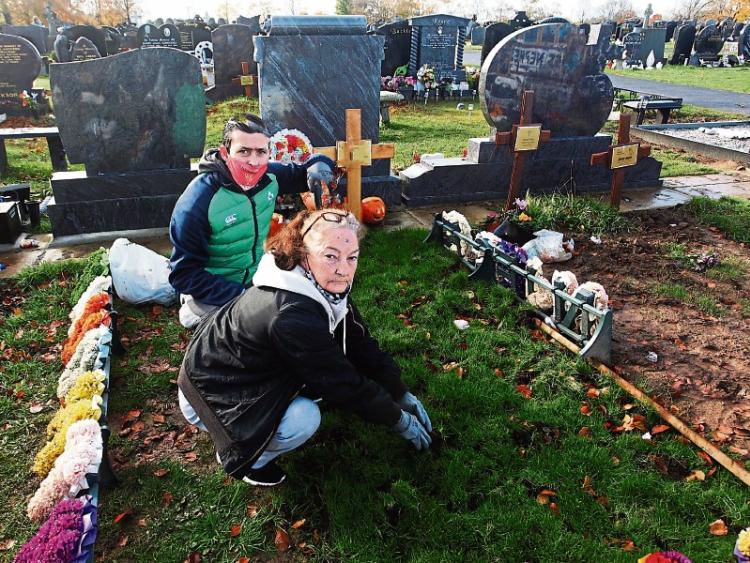 Marie Troy and family friend David McNamara cleaning up around her youngest child Katelynn’s grave, which was trampled over by horses | Picture: Brendan Gleeson

A Limerick mother has spoken of her “heartbreak” after the final resting place of her 17-year-old daughter was “desecrated” by horses.

Mum-of-four Marie Troy was left in tears after she came into Mount St Oliver to visit the grave of her youngest child Katelynn, who died earlier this year, only to find that horses had “trampled all over” the plot.

Hoof prints are visible on the ground below the teenager’s headstone, while some of the mementos left at the base were destroyed.

“When I saw what happened, I cried. I don’t know who owns the horses, but they shouldn’t be in here. They stood all over Katelynn’s plot, they stamped on it. I don’t even know how they missed the other ones,” she said.

The presence of horses in the Mount St Oliver graveyard has forced councillors to spend money erecting a boundary beside the Old Cork Road. The charge has been led by Cllrs Catherine Slattery, Sarah Kiely and other City East members who have dug into their own devolved funding to stump up the cash.

Marie added: “This will be our final resting place too. I will be going down there with my daughter. To think motorbikes and horses come in here. They are not permitted. They are on holy ground.

Do they not realise this is desecration of children’s, mother’s, father’s relatives? It’s a downright disgrace. It’s unacceptable in my eyes and the eyes of the Lord.”

Cllr Kiely joined Marie and eight other volunteers in a clean-up of Mount St Oliver in the days after the horses were first reported.

She said: “Whomever owns these horses should be prosecuted if we can find out who they are. When I came up to see how the clean-up was going, I bumped into Marie and she was very upset. This is people’s final resting place and to have it totally desecrated is really distressing.”

Marie, who lives in Moyross, said horses have also destroyed flower boxes and candle holders at the foot of other graves.

“Things which would have meant something to them. It matters as you have to pick up the pieces. Some of the people up here have nobody, not a soul left in Ireland. Who is looking after them,” she asked, “I feel so heartbroken for everybody who is at rest here.”

During the clean-up, those taking part happened upon a corner of Mount St Oliver where a number of household items were dumped.

Mattresses, cupboards, wardrobes, office chairs, a carpet, blankets and other household goods appeared to have been left there.

“To be honest, I don’t think anyone will shy away from this. It’s just unacceptable, and its quite upsetting for people. I’m looking at Marie and her family and seeing them in tears. It’s not okay.”

Limerick Council previously said it is looking at CCTV in order to identify the horse owners.

It confirmed another clean-up had taken place and a new boundary wall is to be erected around the Old Cork Road side.