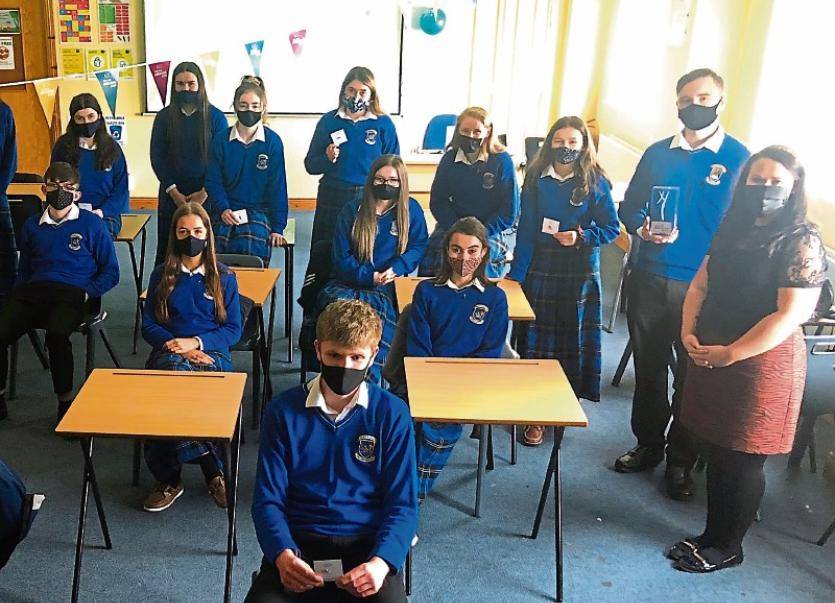 COLÁISTE Iósaef’s award-winning Wellbeing Warriors are needed now more than ever due to Covid-19.

They received their ‘Fun-raising Award’ at a live streamed awards ceremony last week. In recognition of their achievements, the class were presented with a Spotlight trophy and souvenir pin, both designed by John Rocha. The class, who were selected winners out of 400 entries nationwide, were given this particular award for their outstanding achievement in innovative and fun fundraising.

Ms Bailey said last year as part of their social development class, the group decided that in an effort to promote positive mental health within the entire school community, they would like to open a wellbeing room.

“They envisioned the wellbeing room to be a space of calm and tranquility where both students and staff could go to relax, switch off, and take some time out from the busy school day. They planned to fill the room with beanbags, couches, tables and chairs, refreshment facilities, and a meditation area with music and mindfulness activities,” said Ms Bailey.

The Wellbeing Warriors met with principal Noel Kelly who loved the idea. He told the teenagers that wellbeing is now seen as a guiding principle in Irish education.

He allocated them a classroom but explained that dry-lining and plastering would need to be re-done before it would be functional. Quotes came back from contractors for approximately €4,000 for the work to be completed.

“The students knew the project would be a huge undertaking in terms of fundraising, teamwork, communication, and organisation. They decided that while it was a lot of money, they would not give up. They fundraised to achieve their goal.

“They set themselves a target of €5,000 to include dry-lining and plastering, painting, carpet and kitting out the room with required materials. Fundraising efforts included a hugely successful fashion show which was held last January in the Charleville Park Hotel. They also organised a Christmas raffle, as well as a school-based 50/50 draw. In total, the class managed to raise over €4,300,” said Ms Bailey.

Unfortunately as with everything else in 2020, the project came to a halt in March and has been put on hold for the moment.

Principal Noel Kelly congratulated the students and Ms Bailey on the success, saying that they had managed “to bring some light and positivity to what has been a very challenging first term”.