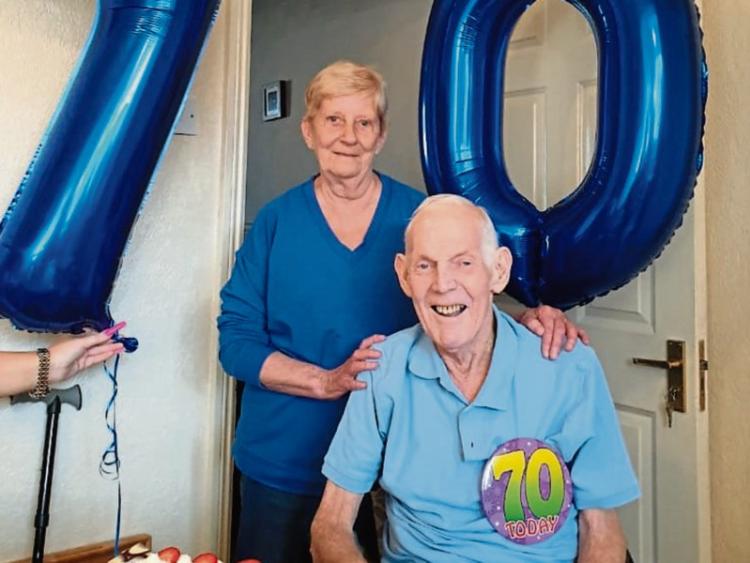 A LOVING husband and wife died within just one week of each other.

After 50 happy years of marriage, John and Martina Brodie took their final breaths within days of one another.

John died on September 30 after a cancer battle, while his wife Martina passed on October 8 following a fall.

The pair were hugely popular in their home parish of Prospect, and could often be seen at their local pub, the Black Swan in Davis Street, enjoying a game of cards, or watching their beloved Munster Rugby on the television.

They did nothing wrong during the first coronavirus lockdown – both cocooning, and staying out of harm’s way.

But tragically, it was Covid-19 and the hospital restrictions which meant the loving couple could not say goodbye to one another properly.

“They were very loving parents, great characters the both of them. My Dad was a hard working man all of his life, while mam stayed at home and looked after the kids. They loved to socialise and mix with people – they were great company to everybody,” said their daughter Laura.

Shane, a well-known local powerlifter, said his father was a real force for good in the community, cleaning the windows for neighbours, especially the elderly, and carrying out repairs.

“He was very well got. Everyone liked him. He was such a pleasant man.”

“They fought like cat and dog. They killed each other, but idolised each other. It proved how much they loved each other – that she couldn’t be without him,” Laura added.

It was truly a case of love on the lines as John and Martina met as teenagers in the Irish Wire factory.

“She only went out with him as a bet,” laughed Laura, with Shane adding: “I guess some of Martina’s friends were slagging her saying she couldn’t pull him!”

Nevertheless, they hit it off, and married a few years later, before rearing three children – daughters Jean and Laura, and son Shane.

The final stages of John’s life were traumatic, sadly, after he was diagnosed with an aggressive form of cancer.

Despite being given just six months to live back in September 2019, he survived to mark two special occasions in March last.

John and Martina marked their golden wedding anniversary, before he hit the 70-year mark a few weeks later.

At the time, Laura said, he enjoyed a few pints of beer and had Tina Turner on the stereo!

In the final months of his life, Martina would not entertain thoughts of her husband passing.

Shane said: “She did everything for him, knowing he was sick. But she never spoke about the situation, apart from the medications he had to take. The word death just did not come into it.”

Heartbreakingly, the last time the pair saw each other was on September 17 when Martina was taken to hospital after a fall which resulted in a hip break.

Laura said: “The sad thing is, at the end, Mum had cared for Dad and never left his side. Then at the end when she had the fall, she had to go to hospital by ambulance. We told her to say goodbye to John. She just said ‘see you later’ to him. That is the last time they saw each other, as nobody was allowed into the hospital due to Covid-19.”

Shane added: “It’s really sad that after being together for so many years, and through the Covid, we could not see her for three weeks, and my Dad never got to say his goodbyes in person. She couldn’t go to his funeral, she wasn’t well enough. It just shows the impact of Covid-19 on all of us.”

Martina – who was due to turn 69 – was a former County Council employee, and was well-known locally for being a talented card player.

She died following complications with the general anaesthetic she was under after her fall.

Laura and Shane have both paid tribute to Ester from Milford Hospice and Liz from the University Hospital Limerick PALS service, who kept in contact with them through video and helped set up the funeral link so they could watch it online.

The loving couple are survived by their sons and daughters, as well as grandchildren, great grandson, nieces, nephews and other relatives and friends.

May they both rest in peace.