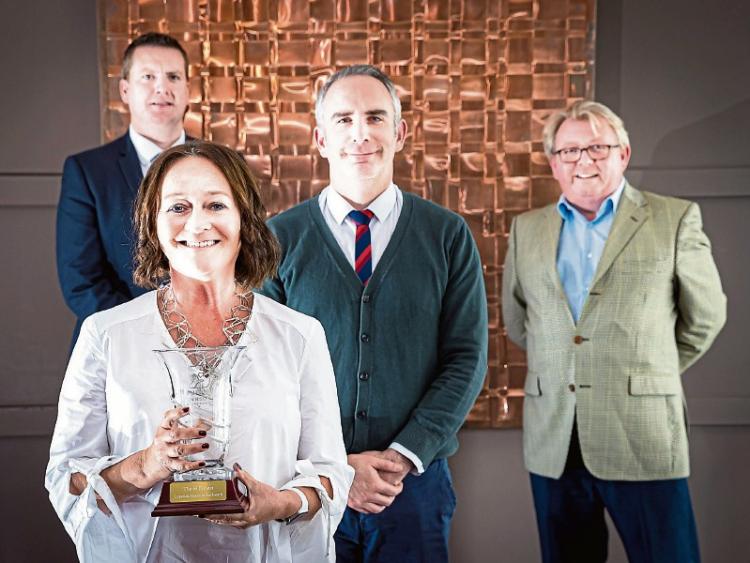 THE team behind a unique project which celebrates and embraces Georgian living as part of Limerick’s inner-city rejuvenation, has been named the Limerick Persons of the Month.

The 68 Project saw a vacant multi-storey Georgian building undergo one of the most ambitious and sensitive restorations in Limerick city centre.

At 68 O’Connell Street, four storeys and a basement were completely revamped and transformed into major commercial offices with a generous-sized apartment on the top floor, a new contemporary extension to the rear of the building as well as a new music recording studio.

The O’Donnell Family Partnership sought planning permission for the major project in September 2017 and permission was granted in January 2018.

Management training and consultancy company Ingenium unveiled its sensitive renovation of the landmark city centre building in February of this year. The company, which provides training and consulting in a wide range of areas to a wide array of industries, employs around 20 people.

“It kind of came our way,” explained Finola O’Donnell, chairperson, Ingenium TC, who accepted the Limerick Person of the Month award on behalf of the entire team behind the The 68 Project which is now home to Ingenium.

Finola and her husband Hugh had been overseas for a number of years but Limerick had been calling them back home.

“Initially when Hugh had the concept of starting a company it was always going to be Limerick-based,” Finola explained.

The couple had been looking around Limerick for a suitable premises and had put out a few feelers to see if any place offered the potential they were looking for.

“We had mentioned it to a friend of ours, Michael O’Connor with O’Connor Murphy Auctioneers, and he had a property that he thought would suit and we went to see it,” said Finola.

It was a perfect location.

“We were renting around the corner in Hartstonge Street in Crescent House. We loved the idea of the Georgian building because we knew there would be space so we went to see it. The roof had been redone. It was obviously bought with the intention of turning it into offices but it never materialised.”

Straight away, the O’Donnells could see the potential the building offered. But they could also see the amount of work that would be required to turn it into what they hoped to achieve.

“We are not afraid of a challenge,” smiled Finola.

“We contacted an architect who we worked with a lot - David Leahy. We brought him on board. It’s always good for them to have a walk through and to see what the potential would be.”

Finola said the team were “very conscious” of balancing the old and the new.

“It’s a listed building so conversation was going to be a huge aspect of it which we knew. We had never worked under the guidelines and rules of a listed building and we knew that was going to be challenging in itself but we had another architect David Averill from Sheehan Barry Architects in Dublin who was also fantastic. We learned through the project about conservation and the importance of maintaining the old. We sourced as much locally as we could.”

Working very closely with Limerick Council’s planning department was integral to the O’Donnells achieving what they set out to do.

“Tom Cassidy was very pleased with the finished product. We spent over a year going through planning - design first and then planning. They were delighted to see our plans.”

Also key to the restoration project were Mark Quinn and David Ducie from the main contractor, QCon, and interior finishing designer Jennifer Gabbett, alongside many other specialists.

Ingenium had only just hosted the business launch party in the revamped premises in February and then Covid-19 struck in March.

“We got a great reception,” said Finola of the reaction to the finished project. “We have gotten great compliments and a great positive attitude from our neighbours along O’Connell Street and other owners in the Georigan quarter.”

The project, Finola says, was akin to a surgical procedure.

“You are pulling things out, repairing them and putting them back. There was a lot of painstaking work done on the ceilings.”

“The main building, front and back, is still as it was. We did a big job in the restoration of the brick work which really, I think, brought out the whole building. We were able to add on a modern feature to the back of it which has an atrium which we used for training and for large gatherings, back in the day when we could have large gatherings. There’s a lovely canteen looking out into a planted courtyard area and then there is a mews right at the back of the courtyard between Daly’s Lane. We have another access from there. That mews is now a fully functioning recording studio.”

In partnership with the Limerick School of Art & Design, Ingenium commissioned a number of students and graduates to create a selection of art that celebrates the intertwining values of the company with the building. These works are displayed throughout the building.

And, finally, have the O’Donnells any future plans for further development in Limerick?

“After every project we do I hang up the hard hat and the boots and say ‘that’s it’ but there might be another one in us!”